By JAROD LIM and FARID WAHAB

About 3,000 property owners in both locations possess leasehold titles for their properties that were previously freehold land.

The land was owned by Edin-burgh Rubber Estates but the status was changed to leasehold when it was sold to a developer and encompasses Taman Bukit Maluri and parts of Bandar Menjalara.

Taman Bukit Maluri resident Jenny Ng claimed that Taman Cuepacs in Segambut had faced a similar problem but owners there managed to convert the status back to freehold.

“We approached Segambut MCA chairman Datuk Daniel Ling and he agreed to help.

“We hope this can be resolved quickly as it will also increase the value of our properties,” said Ng.

Ling urged those who wished to convert their land to come forward.

“In March, Kuala Lumpur High Court had granted approval for the conversion of 24 houses in Taman Bukit Maluri built on Edinburgh Rubber Estate land to freehold,” he said during a meeting with affected residents in Kepong.

“More than 30 people had approached me to apply for the conversion and I believe there are more who want to do so,” he said.

Sim and Rahman Advocates and Solicitors senior partner Sim Wen Yee said that once a court order was obtained, the land conversion application could be submitted to the Federal Territories Kuala Lumpur Land and Mines Office.

“But one of the challenges would be getting affected residents to do a bulk application,” she said.

Sim said land that was subdivided for development should retain its original title as stated under Section 204e (3a) of the National Land Code 1965.

Meanwhile, Segambut MP Hannah Yeoh said, “It is up to the owners to appoint a lawyer whom they think best fits their need.”

She highlighted that the assessment tax would increase after the land title was changed.

Yeoh, who held a press conference at her service centre in Segambut, said her office had received requests from property owners to help with the land title conversion application and that she had raised the matter in Dewan Rakyat last November.

She had asked if it was possible for the separate land titles to be converted from leasehold to freehold en masse.

She had expressed concern that a mix of leasehold and freehold titles would complicate future development plans in Taman Bukit Maluri.

Deputy Federal Territories Minister Datuk Seri Jalaluddin Alias told her that any conversion must be done individually through a legal process in accordance with the National Land Code. 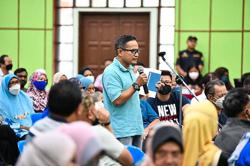