(From left) Lim, Chor and Lee speaking to members of the media about the UTAR Hospital Charity Golf Meet. — SAMUEL ONG/ The Star

UNIVERSITI Tunku Abdul Rahman (UTAR) will host a golf event to raise funds to complete the construction of its hospital in Kampar, Perak.

The UTAR Hospital Charity Golf Meet has been targeted to raise RM1mil.

Chor, who is also the organising chairman of the event, said public support played a crucial role in helping to raise funds in the past.

“The total cost for the hospital is RM330mil and it is about 95% completed.

“However, we are still short of RM80mil,” Chor said in a press briefing in UTAR’s Sungai Long campus in Kajang, Selangor.

Chor said MCA leaders in UTAR came up with the idea to set up a private hospital to act as a training institution for UTAR medical undergraduates.

“We are confident that what we are doing is beneficial not just for students but also for the community including those who are seeking medical care.

“One of the aims of the hospital is to provide affordable care for Malaysians,” he said, adding that the 6.5ha hospital would be fully operational by the first quarter of next year.

He added that its Traditional and Complementary Medicine section, which opened in April this year, had been well received.

Set to take place on Sept 24 at the Sungai Long Golf and Country Club in Kajang, the charity golf tournament is open to the public.

It will be played over 18 holes from 8am and will offer door gifts from sponsors. 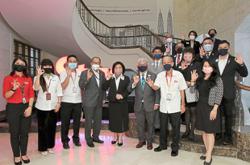