By FARID WAHAB and ARFAH ISMAIL

The site of the proposed tunnel in Jalan Setiawangsa has not been maintained.

Setiawangsa residents in Kuala Lumpur are upset over the delay in completing a tunnel project to link Jalan Setiawangsa and Jalan Mohd Yatim Yahaya.

At present, the two roads are connected via a roundabout that also serves motorists coming from Jalan 34/26 from Sri Rampai (see map).

This is causing congestion when traffic from Sri Rampai and Setiawangsa merges.

Locals said that the planned tunnel will enable motorists to bypass the roundabout.

This area is located under the recently completed and operational Setiawangsa-Pantai Expressway, previously known as DUKE 3.

A check by StarMetro at the project site found it to be overgrown with shrubs and littered with piles of rubbish. 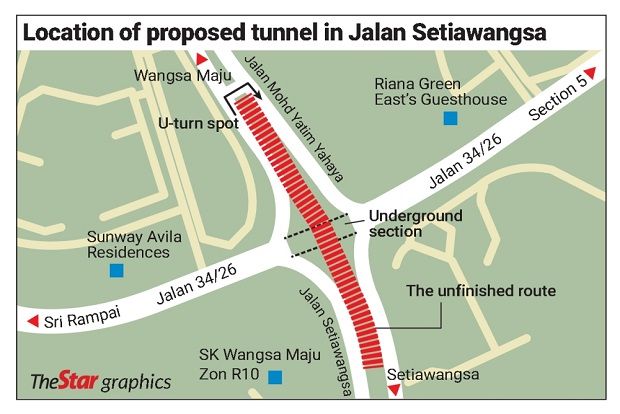 “During a meeting on Nov 24 with DBKL, I was told the project would start in February this year.

“However, it did not take off, and I sent a letter in March seeking clarification,” he said at a press conference with several residents.

Following that request, DBKL officers inspected the site with him on April 4.

“I was then informed that a contractor has been appointed and the project would start by mid-year.

“It is already August, yet there has been no progress,” he said, adding that no date was given by DBKL for the project’s completion.

Haron Mohd Nor said nearby residents were at their wits end with the traffic congestion.

“It is worse on weekdays from 6.30am to 8.30am when parents are sending their children to the nearby school,” he added.

Abdul Rahman Ali, asked that a U-turn be created in Jalan Setiawangsa.

“There used to be one but it was closed.

“As a result, motorists have to take a longer route to go to Setiawangsa or Wangsa Maju,” he said.

DBKL said in a statement that work at the site was expected to start in September and would be completed within 12 months.

“Road closures and traffic diversions will be done at the site during the construction period,” said the statement which did not give any reason for the long delay.