DBKL has not only paved Jalan 3/23F but also other roads in Taman Teratai Mewah, Setapak.

Taman Teratai Mewah residents in Setapak are pleased that Jalan 3/23F has been resurfaced.

He said the frequently used road was riddled with potholes.

“Jalan 3/23F is used as a shortcut by many motorists to get in and out of the main road, Jalan Langkawi.

“The condition of the road had deteriorated with the asphalt thinned out, leaving only a sand surface,” he said, adding that this caused a safety hazard to motorists.

According to residents, Taman Teratai Mewah was a quiet neighbourhood until 10 years ago when more housing projects cropped up in the area.

This resulted in higher traffic volume along the road.

“The road had not been maintained and I highlighted the matter to Kuala Lumpur City Hall (DBKL).

“DBKL’s Civil Engineering Department paved not only Jalan 3/23F but also surrounding roads in front of the shoplots and houses,” he said.

Lai added that they would also propose to DBKL to increase parking bays in the housing and commercial area of Taman Teratai Mewah by reducing the width of the pedestrian walkway on Jalan Langkawi. — By JAROD LIM 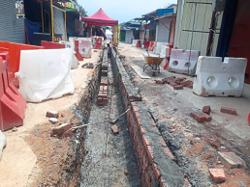