ABOUT RM10,000 was raised for the Universiti Tunku Abdul Rahman (UTAR) Hospital project during the UTAR 10km walkathon.

Held at Sungai Siput Selatan New Village, the programme was organised by the Kampar Heritage and Nature Lovers Club and sponsored by MCA Youth.

Club chairman Daniel Wa said the objectives of the walkathon were to raise funds for the hospital’s development and to promote the new village.

“We want to do our part to help the hospital project with its development.

“It will not only benefit the public, but also help the university students as it is a teaching hospital as well,” he said.

“As for the new village, it has beautiful scenery with an amazing limestone hill as its backdrop.

“It is also the only way for visitors to go to Gua Tempurung Kecil, a beautiful cave with wonderful rock formations,” he said, adding that the new village has a population of about 300 people.

“The place has great potential for tourism and in promoting it, we can create more job opportunities for youngsters and retain them in the state,” said Wa.

The event was attended by about 100 participants who were required to pass through five checkpoints and to walk 10km surrounding the new village.

A mock cheque presentation ceremony then took place where the donation was presented to representatives of UTAR.

The project is estimated to cost about RM330mil.

The hospital’s Traditional and Complementary Medicine Centre opened on April 7.

For more details on the project, go to hospital.utar.edu.my while donations can be made via www.utar.edu.my/uef/ 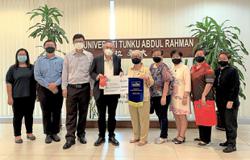 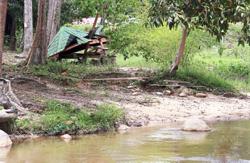