MORE electronic and electrical waste (ewaste) collection points will be set up in Perak to encourage more households to send in their unwanted appliances and devices.

Perak Environment Department director Rosli Zul said they would continue to work with local councils to make sure ewaste was disposed of in a proper way.

“We have about 30 ewaste collection points now, and our plan is to focus more on residential areas,” he told a press conference.

He was speaking after flagging off the “Environment Partners (Rakan Alam Sekitar) Enviro Challenge 2022” at D.R. Seeniva-sagam Park in Ipoh.

Rosli said the general awareness of proper disposal of ewaste was still relatively low among Perak residents as it is estimated that less than 10% of ewaste in the state was been collected.

“Perhaps the problem is our mentality, as people tend to hang on to old items for sentimental reasons.

“Perak has a population of about two million and a global study shows that one person can produce about 2kg of ewaste a year,” he said.

“We collected about 314 tonnes of ewaste during our campaign last year but we are hoping to collect more.”

The Enviro Challenge, which was held in conjunction with National Environment Day, attracted 17 teams consisting of students from higher learning institutions.

They were each given five tasks aimed at creating awareness on the importance of protecting the environment.

They had to show teamwork and fitness as well as learn about evaluating the cleanliness of rivers.

“We will hold a similar challenge for primary schoolchildren on Aug 13 and another one for industry players on Aug 14,” said Rosli. 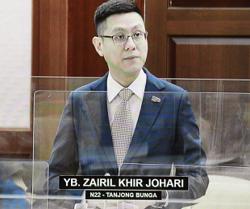