Mohd Hafiz says durians from Segamat were of top quality

THE Johor Agriculture Department hopes to sell more than RM2.2bil worth of durian this year with 32% of fruits coming from Johor.

Its deputy director for development Mohd Hafiz Ramly said Johor was one of the largest durian producers in the country, with more than 30,000 durian farmers to date.

“This year, we are targeting a total production of 125,000 tonnes of durian with an estimated sale of about RM2.2bil” he said, adding that the final figure would be released by the Agriculture Ministry.

The top durian producers in the state are in Tangkak, Batu Pahat, Muar and Segamat, he said.

Mohd Hafiz added that Segamat, known as the ‘King of Fruit District’, is the highest producer of high-quality durian.

“It might not be the highest producer in terms of volume, but in terms of quality, durian from Segamat is the best,” he said, adding that the season in Johor would be ending soon.

Durian prices, in general, have remained the same and are only differentiated by the way durian stall owners market their product, he said.

“There are places where Musang King is sold for RM20 per kg and RM50 per kg.

“It all depends on the quality, grade and how the sellers are promoting their product.

“Our locals are also generally more health conscious these days since the Covid-19 pandemic hit and are spending their money wisely,” he added.

Mohd Hafiz also said that the department was currently offering agriculture incentive for all types of crops next year.

“We have been allocated RM15mil by the federal and state governments to help farmers, regardless of the type of plants they have.

“The average incentive given is about RM20,000 per hectare of land,” he said, adding that the incentive would be given in the form of planting seeds, clearing up plantations, setting up fences, fertilisers and other agricultural necessities. Only about 60% of the local farmers are aware of this incentive, and the department is hoping more would apply, said Mohd Hafiz.

“All of the applications will be reviewed in October this year and approved by November.

“Farmers will receive their incentive by February 2023,” he said, adding that the incentive was an annual programme.

Those who send their application late will be registered as 2024 recipients.

For this year, the department has received RM15mil that have benefited 1,322 farmers.

“Our top export destinations are Thailand, Australia, Brunei, Canada, and the United Kingdom, with 217 tonnes until May this year.

“We have also sent our durians to Spain, France, Macau and Kuwait in the same period,” he said, adding that the durian production also dropped 20% this year from last year’s figure.

This is probably due to the high cost of inputs, caused by the lack of manpower, fertiliser and pest control that have affected production.

“This might have resulted in smaller durians in the market, but even then, it can still be sold.

“It is normal to see smaller fruits during early and end of the season,” he added.

Azizi Azimi also said that the durian season in Johor was different from Penang, Perak and Pahang. 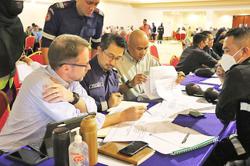