In a phone interview with StarMetro, SACFS honorary treasurer Dr Teckwyn Lim said the degazettement contravened Selangor forestry laws, which state that a public hearing must precede a degazettement.

He said he recently discovered that the state government had “excised” a big chunk of BCFR on May 5 this year.

“I was searching a website on government gazettes when I found out that the state government had excised Bukit Cerakah.

“There are three glaring things here.

“No prior notice was given, there was no public enquiry and no replacement of land (to replace the degazetted land).

“Not having a public enquiry prior to a degazettement goes against Public Inquiry (Selangor) Rules 2014 (Sel.P.U 1/2014),” said Lim, who is also a professor of geography at a private university here.He said any changes regarding forest land had to face a public hearing before the area could be excised.

“The state must hold a public enquiry to give affected people, in this case the residents of Shah Alam, a chance to voice opinions and objections.

“Also, degazettement requires the announcement to be published in two newspapers, which was not done.

“The law is clear under the National Forestry Act 1984 which states that any excision from a forest reserve must be replaced with equivalent piece of land or greater,” he reiterated.

Lim also claimed that Selangor government gave inaccurate information about Bukit Cerakah having been degazetted in 2006.

He said Bukit Cerakah and Shah Alam Community Forest (SACF) still had the forest reserve status as the Gazette Notification 1443 published in 2006 did not mention it.

According to SACFS’s Facebook page, although the Pelan Warta (Excise Plan) No.1443 which included SACF land was drafted in 2006, it was not an official degazettement.

The Shah Alam Community Forest Society further claimed that after it highlighted the absence of an official degazettement, the state government published the degazettement on May 5 and backdated it to Nov 20, 2000, which was even before the Pelan Warta 1443 was drafted.

“This is a serious matter,” said Lim.

In June, StarMetro reported that thousands of people had signed a petition to ask Selangor State Development Corporation (PKNS) not to carry out development in SACF.

Earlier, on May 23, StarMetro reported that PKNS and Universiti Teknologi Mara had signed an MOU to preserve 34.52ha of SACF.

The forest is in Bandar Sierra Alam and 121.4ha is owned by PKNS.

StarMetro reached out to Selangor Mentri Besar Datuk Seri Amirudin Shari’s office for comments but has not received a reply at press time. 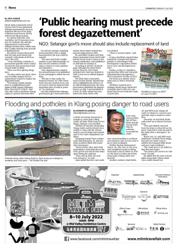