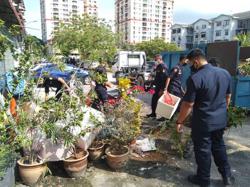 MPAJ together with KDEB carried out enforcement to remove items that were used to book parking spots in residential strata areas like Pandan Mewah and Taman Kosas, Ampang.

The local council has carried out some 20 operations to remove obstructions placed by hoggers in residential and commercial areas.

Items such as traffic cones, flower pots and old chairs are often placed at the parking spots to prevent others from using the space.

“This (booking of spots) becomes an issue when the number of vehicles owned by each residential unit exceeds the number of parking spaces provided.

“Some residents are unaware that this type of behaviour is not allowed, but there are also those who only think of their own convenience,” she said.

Norhayati said enforcement officers could give offenders a warning, notice, compound and/or confiscate any items that were placed on roads and lots under MPAJ’s purview.

“For areas that are managed by joint management bodies or corporations, the committees have the authority to take action under the Strata Management Act 2013,” she added.

The enforcement action was a welcome one as several residents StarMetro spoke to said the situation was getting out of control.

“Previously, there were only a few who did it.

“But now, almost every spot ‘belongs’ to someone who ‘books’ it.

“We are worried about speaking up, in case of repercussions,” said a resident at a shoplot in Pandan Mewah.

He added that visitors to the shops in the area had trouble finding parking space because cones were placed on the bays the entire day.

A Taman Kosas Flats resident, who only wanted to be known as Kalai, said some residents had even built zinc roofs over the spots to indicate ownership.

“No one dares to say anything in case word gets out that we are the complainant.

“So we have to live with it,” she said, hoping that MPAJ would remove such structures as well.

“The council wants to reiterate that booking of parking lots by placing any obstruction on public roads and spaces is an offence,” said Norhayati.

“MPAJ will be organising a strata convention on Aug 27, which will be a good platform for the people to gain insight into the management and maintenance of stratified buildings,” she said.