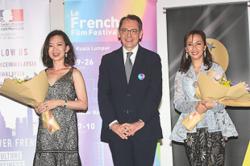 (From left) Chong, Marchand and Haryany Mohamad at the launch of Le French Film Festival 2022 at GSC Gurney Plaza.

Besides film screenings, there are gastronomy, heritage, performing arts and visual arts programmes lined up until July 10.

Cinephiles will be treated to 17 award-winning French films to be screened exclusively at Golden Screen Cinemas (GSC) in Gurney Plaza.

This year’s titles include Aline, a hilarious and touching biopic inspired by the world-famous singer Celine Dion, played and directed by French stand-up comedian Valerie Lemercier.

There are also dramas like Annette, The Big Hit, Proxima, Haute Couture, La Belle Epoque, My Brothers and I, The Family, Red Soil and Tokyo Shaking.

“LFFF22’s programmes will give festival-goers an insight into French culture. We invite everyone to come aboard for an enchanting journey,” she added at the festival’s Penang launch at GSC Gurney Plaza.

“For centuries, France has considered culture – be it fine arts, fashion, music, cuisine, literature, cinema and later video games – to be inseparable from its heritage and identity.

“Though it is often perceived as classic, French culture is, in fact, always moving, always changing and always dynamic,” Marchand said, adding that there would be something for everyone at LFFF22.

Among the other programmes was the Electro Acoustic Latin Jazzy House performance held at Hin Bus Depot, and a gluten-free bread-baking workshop at the AFP.

Coming up are more gastronomic events like a Wine Pairing Dinner at the Mercure Penang Beach today, Popping Champagne! tasting session at E&O Hotel on Thursday as well as Lillet Candle and Martell Cocktail Workshops at the Hin Bus Depot on Saturday.

There will also be a French Heritage Trail walking tour in George Town on Saturday and the opening of Cine France in collaboration with George Town Festival (GTF) at Seh Tek Tong Cheah Kongsi on Sunday.

After Penang, Le French Film Festival will move on to Johor Baru from July 7 to 10 and then to Kota Kinabalu in Sabah from July 14 to 17.

It was held in Kuala Lumpur earlier from June 9 to 26.

Tickets for the various programmes can be purchased online via www.lefrenchfestival.com.my

For the films, visit www.gsc.com.my or purchase tickets at GSC’s e-kiosks. — By JEREMY TAN 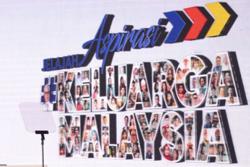