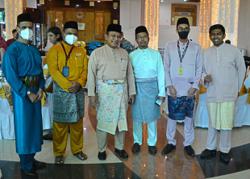 Azhar (in while shirt) opening the Upcycled Lane in Persiaran Tenggiri, Seberang Jaya. On his right is Baderul Amin.

THE Seberang Prai City Council (MBSP) has beautified a former illegal dumpsite in Persiaran Tenggiri, Seberang Jaya near Butterworth and named the place ‘Upcycled Lane’ as proposed by the local residents.

Mayor Datuk Azhar Arshad said it was to curb illegal dumping activities at the spot because it was along the route to a park for recreational activities in Taman Tunku.

“This project is one of the solutions in combating illegal waste disposal apart from the existing enforcement,” said Azhar.

He said MBSP conducted a survey and based on the results, they held a discussion with the residents and later agreed on the beautification project.

“The concept highlighted in this project is in accordance with the needs of various levels of society, namely “Dynamic Path” for the young and “Relaxation Path” for the elderly and people with disabilities,” said Azhar when opening Upcycled Lane in Persiaran Tenggiri in Seberang Jaya.

Azhar said as much as 85% of the materials used for the project were recycled while the rest were cement, paint, fibreglass and other carpentry tools.

“The project, costing RM36,018.09 commenced in February last year and was completed this month.

“I hope Upcycled Lane can help improve the quality of the environment in this area and meet the expectations of the locals to achieve a better quality of life.

“My hope is that the locals can take care of the Upcycled Lane and all the facilities provided so it can benefit everyone,” he said, hoping the city councillors and MPKK would create more of such lanes in their respective areas.

Azhar also said that illegal dumping of bulk waste or rubbish near roads and illegal dumpsites had become a trend among irresponsible parties.

“They feel it is a way to simplify work, energy and save costs regardless of the impact on the environment.