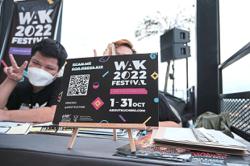 (From left) Bissex presenting the recognition from Unicef to Mohamad Azhan and Sharipah Marhaini.

Next, there was a march past by 40 contingents led by International Wind Band Festival 2019 gold winners, Catholic High School Petaling Jaya.

In the parade were teams that highlighted areas such as education, tourism, health, safety and the city council itself.

There were also performances by Iman Troye, Suki Low and Mr 5K entertained the crowd who had gathered in their hundreds at the heart of Petaling Jaya.

UNICEF Representative to Malaysia Amanda Bissex presented Petaling Jaya with a certificate for being the first city in Malaysia to reach the halfway milestone in becoming a child-friendly city.

Petaling Jaya has completed three steps with the fourth being the action plan implementation followed by an evaluation, which will take between two and five years to complete.

MBPJ was previously acknowledged as a learning city by Unesco, and received the award in 2019 at Medellin City in Colombia.

Among them was the poetry declamation, which saw participation from Petaling Jaya’s multiracial community.

Mohamad Azhan highlighted that the theme of the celebration was “Stimulate the economy, prosperous community” as the country was transitioning to the endemic phase of the Covid-19 pandemic.

To reflect this, some 100 booths were set up, offering a range of Malaysian delicacies while food trucks lined the streets.

The mayor said the “teenaged” Petaling Jaya was filled with energy, spirit and durability.

“These characteristics are aligned to the 2030 Petaling Jaya Smart, Sustainable and Resilient blueprint,” he said. (From left) Bissex presenting the recognition from Unicef to Mohamad Azhan and Sharipah Marhaini.