A BEVY of beauty queens spent a day painting with persons living with rare diseases (PLWRD), to create awareness about such conditions, promote inclusivity and raise funds for art activities.

The social enterprise helps PLWRD to explore their artistic creativity and sells their art to help them earn an income.

“Art for Rare” was organised to benefit 13 children and three adults who are living with a range of rare diseases.

The artwork of 15 finalists will be used to raise funds until Aug 15.

Proceeds will be used by FriendenArts to fund art activities for PLWRD.

The reigning Mrs Malaysia International Melinda Khoo said when she won the title, she chose to advocate the plight of PLWRD.

As a mother who had a child with Hirschsprung disease (a developmental disorder), Khoo said she knew how families would feel when they are told by doctors that their child has a rare disease.

“When it happened to me, I felt helpless, confused and alone.

“I had never heard of the disease or even the term ‘rare disease’.

“I want to be the voice for this minority group.

“The children are happy. All they need is support and inclusion, not pity.

“In order to survive, we need to give them opportunities and the chance to participate in society,” she said.

Khoo said she wanted to create more awareness of rare diseases so that more research and medical budget would be allocated for the group.

MMIG founder Timothy Gan said the organisation was happy to organise an activity for the children.

“There are not many activities that support these children’s needs.

“Today, the children and their families met other similar families.

“They can share their thoughts and encourage each other,” he said.

FreindenArts founder Yap Sook Yee said there were about 7,000 types of rare diseases affecting some 300 million people worldwide, which translated to between 3.5% and 5.9% of the world’s population.

She said PLWRD would often face social and psychological challenges, such as isolation as they do not know anyone else who has the same disease.

“They experience stigma within societal structures, like healthcare settings, workplaces and educational institutions,” she added.

Yap said in Malaysia, rare diseases affected less than one person in every 4,000 people.

She said FriendenArts was initially founded to help her son Brenden Lim, who has spinal muscular atrophy, and to have a platform to sell his artworks.

“Brenden started painting at two years old as part of his therapy and never stopped.

“We tried selling his work and realised there were people who were interested in them,” she said.

Seeing the response to her son’s artwork and the potential in tapping the creativity of PLWRD, Yap said they were inspired to set up an art lab to develop creativity and art skills in such children.

“Many of these children do not go to school.

“So if they can develop their artistic skills, they can earn their own money and develop self-esteem, instead of relying on charity,” she concluded. 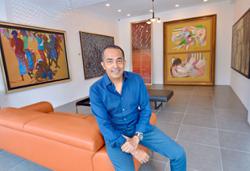