SOME 76,000 Rumah Idaman housing units are being planned by the Selangor government to boost home ownership among the B40 group.

This includes the 4,600 currently under construction and another 33,000 awaiting planning approval from the local authorities.

“A completed unit will be equipped with a wardrobe, air conditioner, refrigerator and water heater, as well as a parking bay.

“Rumah Idaman projects are undertaken by the state government through Mentri Besar Incorporated and its subsidiaries,” he said.

Amirudin noted that some 2,500 such units in Kajang, launched in 2018, were recently completed.

“The homeowners will receive their keys next month,” he said in his speech at the Jelajah Selangor Penyayang fair in Taman Kosas, Ampang.

The event consisting of exhibitions by government agencies and community activities, was to promote welfare initiatives by the state government.

It was attended by Selangor executive council members and local council presidents.

At the event, Amirudin also announced the Rumah Harapan initiative – another project aimed at the low- and medium-income groups.

He said thousands of units had been approved for construction, and that these were meant for those with monthly income of below RM10,000.

He also announced the Smart Rent programme which would see 3,000 rent-to-buy units ready by 2027.

“Under this initiative, qualified applicants can rent a unit for five years at the market price.

“After this period expires, they can apply to buy the unit, and 30% of the rent paid will be used as a deposit.

“This is meant to benefit the B40 folk who are unable to secure bank loan to own a home,” he explained. 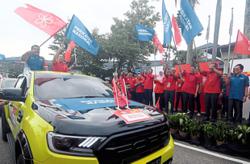