(From second left) Amelia, William and Tiang at the unveiling of the mural.

A PETROL station in Sibu has become the first in Sarawak to have a mural at its premises.

The artwork was done by a local street artist Aries Kong who is widely known as Jagung.

Sri Minyak Group general manager Amelia Tiu said the 3D mural was titled “You Lu” in Mandarin which means “there is a way”.

She added that she hoped the mural would become a tourist attraction and promote Sarawak’s unique culture to local and foreign visitors.

He said Sibu was rich with heritage buildings and that murals painted by local artists would help promote them.

“The initiative (mural painting) was started in Raminway.

“It has rejuvenated and helped preserve the original architecture of these buildings and become a new attraction for tourists,” he added. 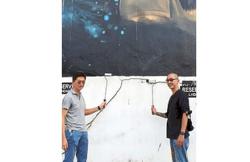