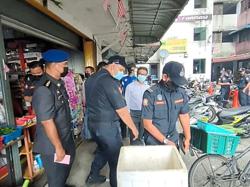 AFTER a two-year hiatus, Subang Jaya City Council (MBSJ) was once again able to hold its traditional Hari Raya Aidilfitri celebration to strengthen goodwill and relations between the staff, media partners and stakeholders.

Mayor Datuk Johary Anuar and his deputy Mohd Zulkurnain Che Ali, along with the top management, welcomed guests at the gathering held at the city council headquarters in Selangor.

Johary said the city council’s focus after the endemic transition phase was to revive the local economy and help it progress.

“Traders’ livelihood was disrupted during the Covid-19 pandemic and many were not able to do any business at all in the last two years.

“MBSJ will support the issuance of relevant licences to local traders, including those who were previously unlicensed, to ensure that they can trade without causing traffic disruption or accidents,” he said.

There was extra cheer for the children of council employees when Johary presented duit raya to them.

Many guests brought along their own food and beverage containers while metal utensils were provided for those who did not bring their own.

No disposable plastic and polystyrene materials were used during the celebration, while bins were available for waste separation.

This effort was to ensure that sustainability was maintained to create a better quality urban environment.

The ceremony, which drew more than 1,480 MBSJ employees and synergy partners, was also attended by the former council mayor, president and deputy president, members of Parliament and Selangor assemblymen. Guests at the MBSJ Hari Raya Aidilfitri celebration enjoying the delicious food served at the 20 stalls.