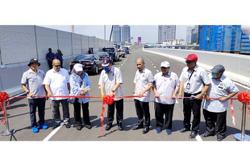 Motorists heading to the Kampung Pandan roundabout can now use a flyover from Jalan Tun Razak in Kuala Lumpur.

The 2.8km three-lane road starts in front of the Royal Selangor Golf Club before ending in Kampung Pandan.

“This flyover is also to provide access to motorists exiting from Jalan Bukit Bintang.

“It connects to MEX highway too,” he said.

Shahidan added that plans were being made to link the flyover to the Setiawangsa-Pantai Expressway that was currently under construction.

However, the project experienced several delays, some of which were due to the movement control order in 2020 enforced to curb the spread of Covid-19.