A Fire and Rescue Department worker helping to put out fire at a landfill in Bandar Tenggara in Kota Tinggi, Johor, in 2019. — Filepic

During this hot and dry period, the Johor Fire and Rescue Department is urging the public not to carry out open burning.

Its director Datuk Yahaya Madis said a small open burning incident could turn into a major problem if the fire was left unattended.

“People carry out open burning as it is the easiest and fastest way to clean their garden of dry leaves or branches.

“However, most of those who do open burning seem to forget one important rule, which is to make sure to put it out before leaving, as a small fire can turn into a big one within minutes,” he told StarMetro.

Yahaya warned that the presence of dry leaves and branches coupled with strong winds was the perfect ingredient for a fire to spread quickly.

However, he added that the department was prepared for any incidents.

Special attention would be given to landfills and operators who needed to be extra vigilant during the monsoon period, he said.

“Open burning incidents at landfills occur yearly due to the actions of individuals searching for valuable items such as scrap metals hidden under the pile of rubbish.

“These individuals set fire to sections of the landfill to make it easier for them to search for these items.

“Their irresponsible actions lead to huge problems for firemen as it takes us weeks to put it out completely,” he added.

It was reported by Bernama recently that the south-west monsoon – which has just started – was expected to continue until mid-September.

“This results in a lack of rain cloud formation and causes most places across the country to experience more days without rain than other seasons, as well as produce low rainfall distribution,” he said in a statement.

He said heavy rain with strong winds and lightning due to the squall line phenomenon could still occur on the west coast of the peninsula and west of Sabah in the early morning, lasting up to several hours.

During this period, the haze phenomenon could also occur if open burning is not controlled, especially from August to October.

He advised the public to use water prudently during this period.

Information on the latest weather condition can be obtained through their website and myCuaca mobile application. 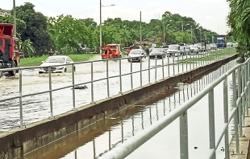