UTAR students picking up rubbish during the clean-up in Mambang Diawan New Village.

The Bachelor of Communication (Honours) public relations students cleared rubbish from streets and drains as well as collected containers to prevent them from becoming Aedes mosquito breeding grounds.

They also distributed infographic flyers on dengue and spoke to the villagers about prevention measures.

The activity – held with the assistance of Kampar District Council – was a corporate social responsibility project that was part of a requirement for the students’ coursework.

District council administrative officer Mohd Izham Ahmad, who launched the event, said the clean-up was a great way to create awareness among the villagers.

“The transmission of germs and dengue is caused by stagnant water in food containers, both plastic and polystyrene.

“Cleanliness is the most crucial aspect of daily life, and is very important to our health. I hope we can hold similar activities in other locations,” he said.

He added that while dengue cases in the district were not as high as in other areas, there were still some.

“We would like to encourage the community in the Kampar district to spend at least 10 minutes a week cleaning their premises to prevent outbreaks.

“Items such as flowerpots and containers are common breeding grounds for Aedes mosquitoes and should be cleaned regularly,” Mohd Izham reminded. 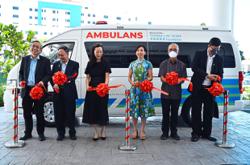