MOTORISTS and agents with unused Subang Jaya City Council (MBSJ) parking coupon booklets can exchange them for credit at a replacement programme this weekend.

The three-day “Program Penggantian Kupon ke Kredit” by Smart Selangor Delivery Unit (SSDU) will be held from March 26 to 28, 8am to 6pm, at SS15 Multipurpose Hall in Subang Jaya.

Full details of the programme will be posted on MBSJ’s social media platforms.

“The value of the remaining coupons will be credited into the Smart Selangor Parking (SSP) app,” Subang Jaya mayor Datuk Johary Anuar said at the city council’s full board meeting yesterday.

“We were told by SSDU that the programme can cater up to 10,000 people per day.

“This initiative is only for those with MBSJ parking coupons.

“If coupon holders are unable to make it this weekend, SSDU plans to hold a similar exchange programme at their office at a later date.”

Johary said MBSJ was transitioning to cashless payment for its on-street parking following the expiry of its concession agreement with Godell Parking Sdn Bhd on March 31.

Users with MBSJ parking coupons have until March 31 to fully utilise them, as only cashless payment using mobile apps and ecoupons can be used beginning April 1.

It was earlier reported that starting Jan 3, motorists throughout Selangor would have to use the SSP app or other e-payment methods for on-street parking managed by local councils.

Every local council in Selangor is expected to have easily accessible ecoupon agents to help motorists who do not have the mobile app installed.

Lee Jen Uyin and Teh Eng Teck asked what would happen to parking agents holding many stacks of unused parking coupons.

They said that even if the agents were able to convert the coupon value to credit, they would be stuck with large amounts of money and few users who need their ecoupon services.

“These are all valid concerns we plan to highlight to SSDU,” said Johary.

“In fact, MBSJ also has some 36,000 parking coupons left in stock that we need to clear.

“SSDU is also supposed to issue a statement to clarify the matter, as the March 31 deadline is fast approaching,” he added.

Separately, councillor George Yap asked about the approval process and licence application for premises selling alcoholic beverages in view of the existing rule that such premises could not be located too close to residential areas.

“Although the licence approval to sell alcoholic beverages falls under the land office’s Excise Board, there are certain matters that come under MBSJ’s purview, such as the issuance of business premises licence under the food establishment, trade or entertainment by-law,” said Johary.

“This is a valid concern as the existing guideline states that premises selling alcoholic beverages cannot be located within 300m of religious or residential areas.

“But with more mixed development and transit-oriented development projects coming up, it will be challenging for such a condition to be met.” 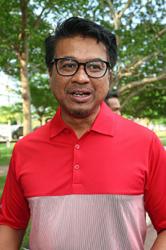