‘I have more things to throw out’

By AIDA AHMAD and C.Y. LEE 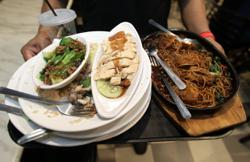 Chin (left)and Sornavalli throwing out all the items that are no longer salvagable from their flood-hit homes in Jalan Seroja.

AFTER surviving the floods over the weekend, Selangor folk now have to contend with the devastation left behind.

For the residents of Jalan Seroja, Port Klang, whose homes were hit by floodwaters that reached knee-high on Saturday, this means sifting through household items to salvage what they can and throw out the rest.

Thousands of ringgit worth of furniture and electrical items have been damaged and need to be discarded while the houses are cleaned up.

As the number of damaged goods piled up, some residents banded together to rent private roll-on-roll-off (roro) metal bins to be placed outside their homes.

One of them was office worker Sornavalli Sethu, 50, who along with three of her neighbours forked out close to RM300 for a roro bin to dump the rubbish and debris.

“The floodwaters had damaged my wood flooring, and because of the moisture, the wooden panels all started to bulge out and expand.

“The skirtings were damaged, as was my coffee table, some cabinets and dressing table that had to be thrown out because they started to smell bad after 24 hours.

“I even had to throw out one luggage full of saris I purchased from India.

“My kitchen cabinet doors and wardrobe doors were also damaged. We don’t know the estimate of damages as we are still assessing as I have more things to throw out,” she told StarMetro.

Sornavalli said a contractor friend helped them to rent the bins because they could not rely solely on Klang Municipal Council’s (MPK) waste collection services, as it may take days for the items to be carted away.

“I have more things to throw away but if I do, then I wouldn’t have any furniture at home.

“Things like soaked, damaged mattresses cannot be kept in the house because of the stench,” she added.

Housewife Helen Chin, 65, who has lived in the area for 20 years, also had to throw out mattresses and pieces of furniture.

She said her fridge and washing machine were damaged as well.

“Our neighbourhood is prone to flooding but it was shocking to see the water reach knee-high level so quickly.

“But we consider ourselves lucky in a sense because we can rent a bin to throw the damaged goods; there are other people worse off than us,” she said.

Just a few doors down was housewife Arulmary Selvam, 50, and her husband Steven Francis, 53, who incurred losses amounting to about RM5,000, not including the cost of damaged electrical appliances.

Their front porch was filled with discarded furniture and damaged mattresses.

A relative, Lily Arulanadan, 64, was also present to help with cleaning up the post-flood damage.

“We have complained numerous times about drainage problems in our area to the local council, as they are contributors to the flooding problems, and I hope something can be done about it. This is devastating to deal with,” said Lily.

When approached, she said MPK has arranged for a post-flood rubbish cleaning plan for bulk rubbish by KDEB Waste Management Sdn Bhd which will provide roro bins.

“But people must remember that this will take a few days to do because there’s a lot to cart away,” she said.

Meanwhile, KDEB Waste Management (KDEBWM) ​said it will mobilise more than 70% of its assets at flood affected areas in Selangor to remove waste as quickly as possible.

“Our focus is to remove bulk waste from flood affected areas first before moving it to the landfill.

“Shah Alam City Council has allocated a site in Bukit Kemuning to be used as a temporary transfer station which will speed up the collection of bulk waste,” said Ng, who is KDEBWM board chairman, at a press conference yesterday.

Some 2,000 workers have been tasked with the clean-up effort, alongside over 800 armroll and compactor vehicles since efforts to clear up the affected areas began on Sunday.

“We ask those not affected by the floods to please be patient with us if there are delays in their area and to give us time to settle down once the task is done,” he said.

“We target that the clean-up will be done in about one week, although the state government has given us one month to complete the task,” he added.