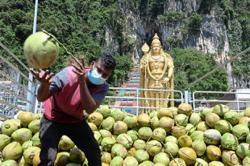 Selangor government can only offer initiatives and lend support to associations when it comes to helping p-hailing and e-hailing workers, as anything else in terms of policy and regulation falls under the Federal Government.

“Issues that require negotiations with p-hailing and e-hailing companies, such as disputes and policies, can only be resolved if the Federal Government amends the relevant law at federal level,” said Selangor human capital development, sports and youth generation development committee chairman Mohd Khairuddin Othman.

“I understand that E-Hailing Coalition Malaysia (Gem) has attended meetings at federal level but there hasn’t been a concrete outcome.

“So the state government can only lend its support to Gem as well as offer financial and welfare aid where we can.”

He said this at the Selangor state assembly sitting, in Shah Alam, in response to a supplementary question by Rajiv Rishyakaran (PH-Bukit Gasing), who asked if the state planned to step in as a negotiator to resolve problems faced by p-hailing and e-hailing workers.

He was answering questions raised by Jamaliah Jamaluddin (PH-Bandar) and Azmizam Zaman Huri (PH-Pelabuhan Klang), who asked about state initiatives to help e-hailing and p-hailing workers and details on Ride respectively.

“Ride is a programme to encourage youths to join the gig economy sector, particularly as a food delivery rider,” said Mohd Khairuddin.

He disclosed that the state government allocated RM2mil to continue this programme next year.

He added that i-Saraan was an added benefit of the Ride programme, which allowed self-employed people and those without a fixed income to make voluntary contributions for when they retire as well as to receive additional contributions from the government.