The Placemaker Awards Asean (PAA) 2021 is a newly introduced programme to recognise those who transform public spaces in South-East Asia, thereby helping to improve quality of life and strengthen local communities.

StarMetro speaks to some of the winners in various categories to gain insight into their projects and how they have impacted local communities.

Hin Bus Depot in George Town, Penang, has undergone some interesting transformation over the years. The bus depot for Hin Company Ltd was an abandoned building. Today, it is a space for arts and creative entrepreneurs.

Its gallery manager Wanida Razali said the last transformation came about when Lithuanian street artist Ernest Zacharevic was sourcing for a space for his first solo exhibition in 2014.

“We were a little stunned with that choice, as the space was abandoned for a decade and looked like a jungle,” she said.

“We approached the owners, who were receptive to creative arts and allowed us to use the space.

“The owners bore most of the repair cost to ensure the depot was safe, while a creative collective manages the space and curates the artists and startups that occupy it.”

It currently occupies over 60,000sq ft, including eight shophouses in Jalan Gurdwara and three others facing Jalan Kampung Jawa Lama.

“But the space supports and showcases artists and art forms of all kinds.

“It has also hosted events such as film screenings, workshops and talks.

“Hin Bus Depot is designed as a space for creatives to come together, so our collective is constantly working to engage with the public.

“There is a ripple effect. When the community is comfortable with what the depot offers, they are more likely to come again.”

She added that the receptiveness and generosity of Hin Bus Depot’s owners made it easier to host creative talents and for them to produce content in a community hub.

“We’re very flexible with how the space is used.

“There are plans to develop parts of the property for more creative spaces and non-creative businesses.

“Our priority is to support small businesses, as we want to contribute to the community in a meaningful way,” Wanida added.

“It all started with the restoration of Caffe Diem, a 120-year-old heritage building that was abandoned for the past 30 years. “The backlane behind the cafe was dirty and a haunt for drug addicts.

“We cleaned up the lane, installed a drainage system, placed interlocking pavement tiles and improved the landscaping,” he said.

As more people came by to hang out and take photos, the developer decided to include more placemaking elements to enliven Lorong Caffe Diem.

“We engaged a local artist to paint a mural and a third-generation tinsmith to craft metal lighting covers for LED lights.

“Neighbourhood uncles and aunties, who were initially sceptical of the idea, are now very supportive and they help care for this space,” said Cheng, adding that Encomas was seeing to its maintenance.

Lorong Caffe Diem serves as a space to promote local arts and culture, where multicultural events and community activities are held.

“We have two rules, which are no consumption of alcohol and all events have to stop by midnight because as there are residents in the surrounding shoplots.

“It became a popular tourist attraction.

“That had a positive spillover effect on Pekan Cina, where the backlane is located, Pekan Melayu and other nearby heritage places.

“The throng of visitors helped local businesses flourish and spurred the local economy.”

While some tourists have returned, Cheng said public events would likely only be held next year.

Another CSR project Encomas embarked on was to revitalise the former trading port Jeti Pekan Cina into a tourist attraction.

“I hope more companies, big corporations or SMEs, will include placemaking as part of their social initiatives.

“It doesn’t have to be something requiring a lot of investment.

“It can be as simple as adopting a small park or common space, then build it up with patience, determination and community engagement,” said Cheng.

Placemaking During the Pandemic/ Placemaker of The Year

It has since evolved, serving as an educational tool and common platform for people from different social backgrounds to learn from each other.

“We came up with the idea of having an urban farm upon learning that low-income families spend a large portion of their daily income on food, so they welcomed the opportunity to grow food if given the space. “We turned a former dumpsite in the city into an urban public farming area,” said Jai Baan Studio founder Supawut Boonmahathana-korn, whose architecture firm came across the site while doing land mapping work.

Volunteers and civic groups took three months to clean up the site belonging to the Thai central government, while experts advised on soil matters and ran workshops on organic planting and types of seasonal produce.

“There are three groups that work on the 0.4ha urban farm,” said Supawut.

“Jobless people are hired to grow vegetables and rear chickens for eggs. These are sold at affordable prices and distributed free to the homeless and welfare homes.

“Low-income communities use the garden beds to grow their own food.

“Some garden beds are allocated to local schools, where students get hands-on experience on urban farming. The harvest is sent to their canteens to be cooked for meals,” he said, adding that Chiang Mai Urban Farm was a community effort with no profits involved.

It also aims to promote the message that organic produce can be affordable and accessible.

“It is an example of a community helping each other and empowering people to take care of themselves and families, without necessarily relying on government aid,” Supawut said of the nearly two-year-old project.

“There are no social or economic barriers at the farm. Everyone works together.

“The sharing concept makes people feel proud of their efforts.

“There is a certain pride in seeing organic produce, grown by the homeless and being sent to five-star hotel kitchens,” said Supawut.

NGO/ Community (Public Space) and Placemaker of the Year

Kota Kita Foundation worked with Kampung Ngampon in Solo, Indonesia, to build a multi-purpose common space, after residents identified a need for a community hub to support economic development and social activities.

“Kampung Ngampon is known for its birdcage-making cottage industry. That is the primary source of income for many,” said architect and urban designer Bima Pratama Putra from Kota Kita Foundation, which specialises in urban planning and citizen participation in city development. 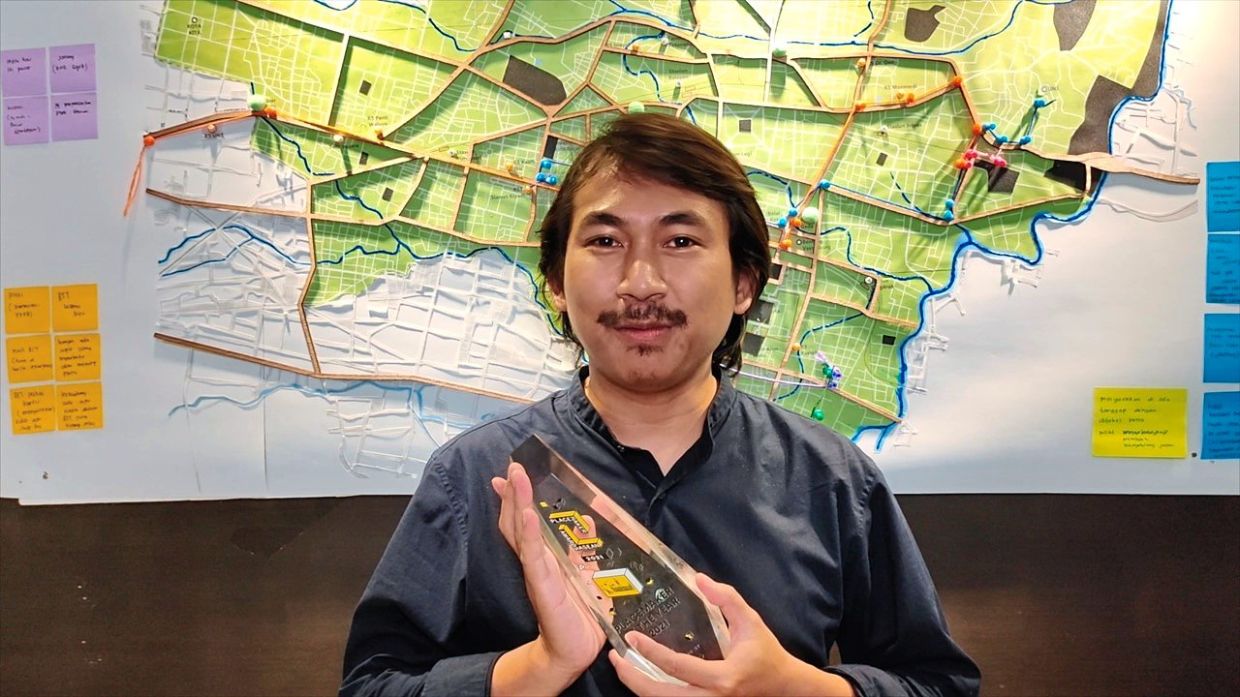 “We worked with villagers to examine the potential and challenges in their cottage industry, and collaborated on solutions to improve livelihoods.”

After over a year of brainstorming, the villagers narrowed down their problems to lack of space as well as economic and social issues.

“As space was limited in Kampung Ngampon, most people worked from their homes.

“That meant their living space was filled with work materials and accumulated rubbish,” said Bima.

“In terms of economy, the villagers’ focus on crafting birdcages left little space for innovation.

“Their work was of high quality and they had potential to create other bamboo-based crafts.

“Meanwhile, mothers juggled working, cooking and watching over children. The children also had no safe space to play.”

Bima said a co-working space was deemed an ideal solution to house all the birdcage makers, their materials and tools under one roof.

“We rented a small piece of land and applied for a grant to build the co-working space. Two small strips of space nearby were turned into a playground and an urban garden.

“The co-working space is where birdcage makers now work, exchange knowledge, share tools and information such as transport schedules and prices,” he said.

It is also the village’s focal point where the community holds monthly meetings and hosts events including weddings.

“Our foundation is now focusing on educating and empowering the community,” said Bima.

“These include forming a cooperative to secure villagers’ welfare and guiding them to engage with the government to turn Kampung Ngampon into a place for creative kampung tourism.”

The foundation plans to draw up a guidebook to show how a cohesive community effort can be applied to other villages and cities. 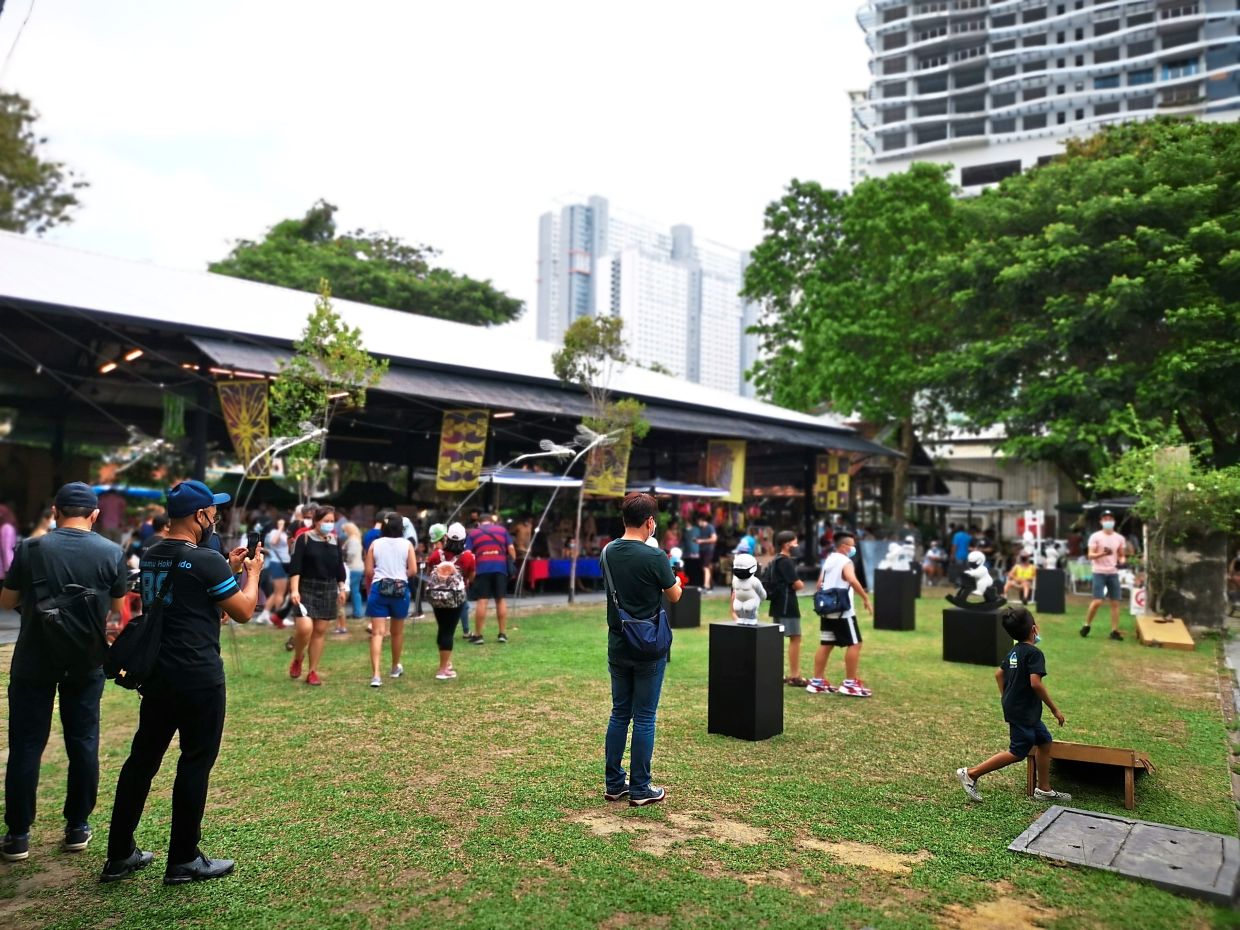 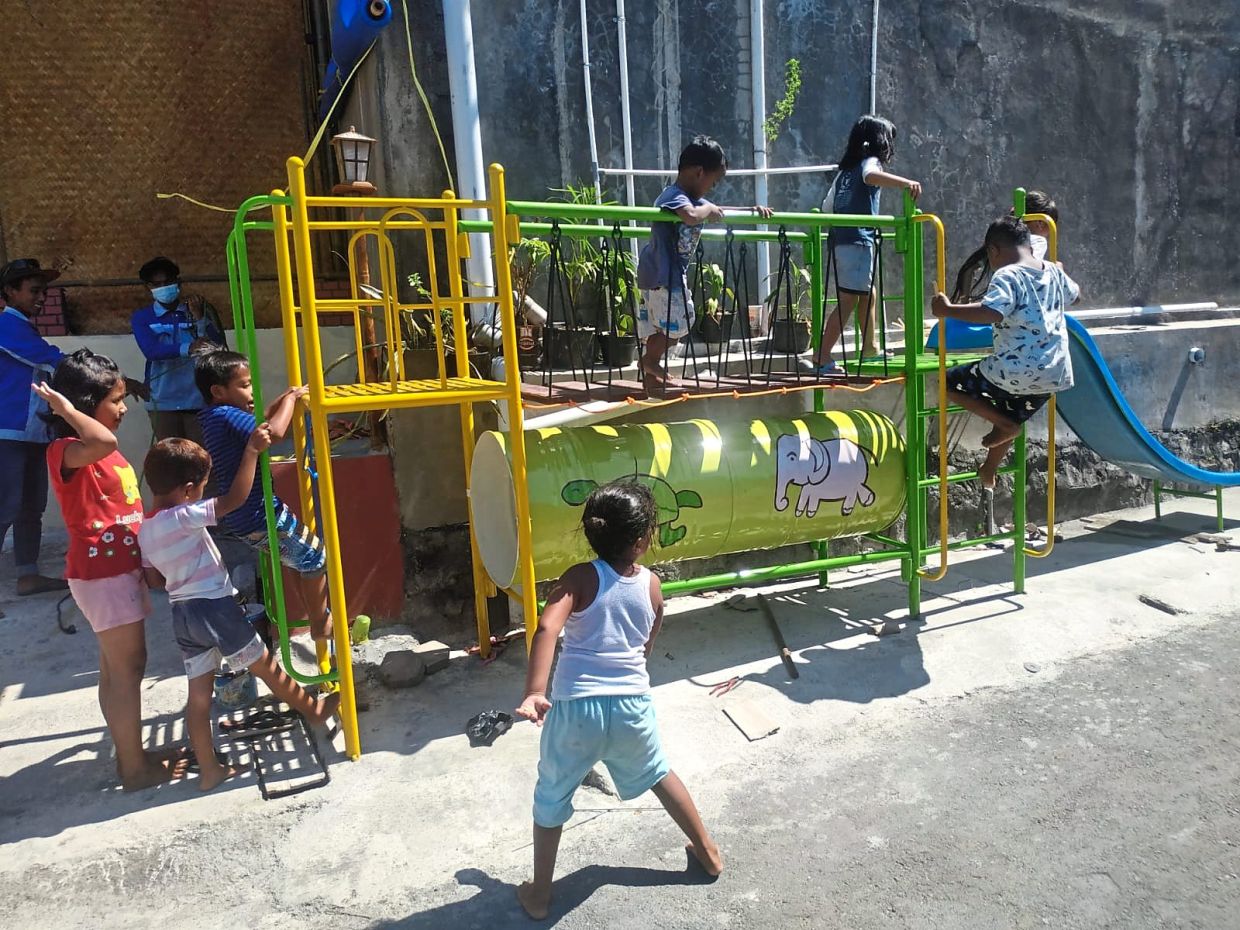 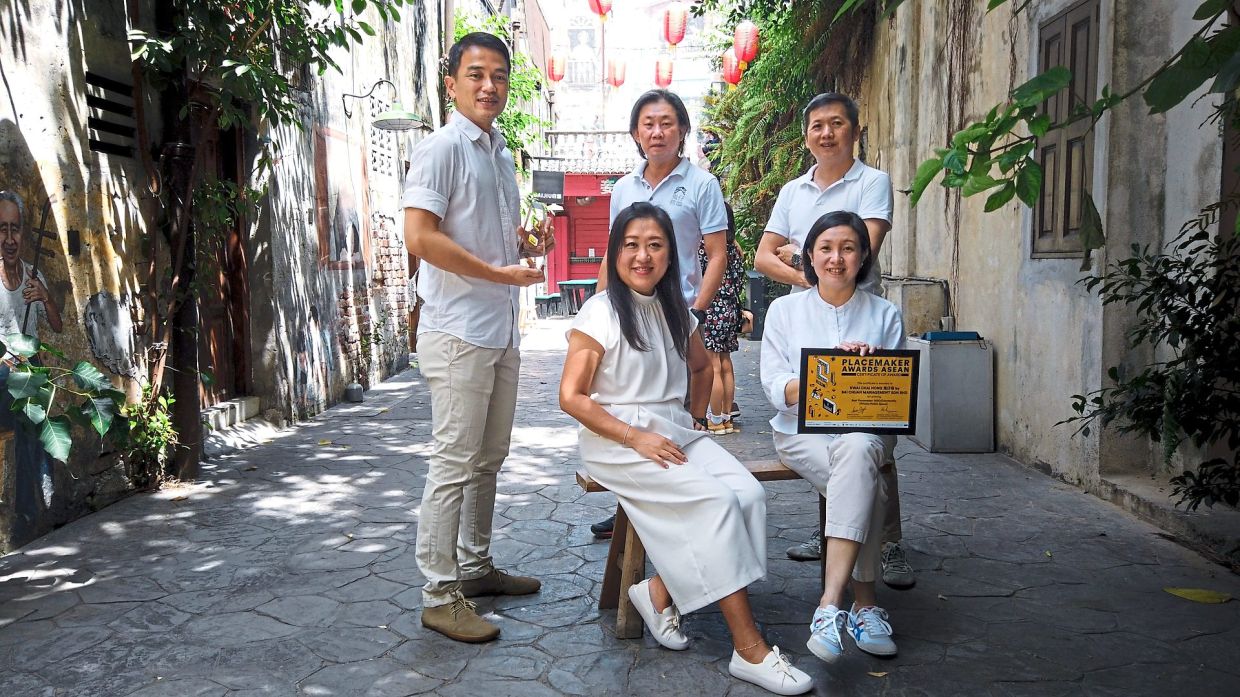 A before (top) and after (below)comparison of the revitalisation of Lorong Caffe Diem in Alor Setar, Kedah. Encomas Sdn Bhd took on the project as its CSR initiative. (Photos taken pre-pandemic)