At a simple event, the rail car was attached to coaches at the MRT Depot in Serdang as a symbolic acknowledgement that the final train set had been delivered.

“This scope of collaboration also covers know-how transfer in the areas of assembly, testing and commissioning, facility upgrading and testing capability enhancement through dynamic test track investment, as well as local supply chain expansion, with the value estimated at RM158mil,” he said.

He added that ICP implementation under MRT Putrajaya line was a continuation from similar initiatives during the MRT Sungai Buloh-Kajang line, whereby the ICP has contributed to an economy output of about RM2bil in comparison to RM1.06bil spent, a gross domestic product of RM724mil, as well as local direct workforces of 9,555 people involved.

The event also witnessed the signing ceremony between Hyundai-Rotem Company and Nova FRP Sdn Bhd as the ICP recipient for the collaboration in ICP Initiatives that involve technology and expertise transfers on localisation of cab mask and coupler hatch rail components. 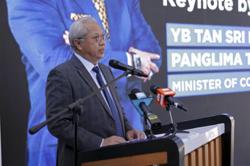