Campaign to update data on disabled to kick off in 2022

A CAMPAIGN to encourage the registration of people with disabilities will be carried out early next year.

“The state government plans to carry out the campaign at the beginning of next year to encourage more people with disabilities to register with JKM.

“This will help us find out if there is an increase in the number of people with disabilities in Johor as well as keep data on the group updated.

“With such data, it will be easier to allocate aid and assistance to people with disabilities,” she said during the state assembly sitting at Bangunan Sultan Ismail, Kota Iskandar.

Zaiton was responding to Datuk Zulkurnain Kamisan (BN-Sri Medan), who asked the number of people with disabilities in Johor.

“Some 5,450 are visually impaired while 373 have speech impairment and 3,208 people have other forms of disabilities,” she said.

“The department is improving guidelines for the operation and management of PDK.

“This will also include training and rehabilitation of children with disabilities in the PDK,” she said.

On a separate matter, Johor investment, entrepreneur development, cooperative and human resource committee chairman Datuk Mohd Izhar Ahmad said more than 12,000 people in Johor had lost their jobs due to the pandemic.

“Based on the Johor Labour Department’s data, a total of 1,003 employers (739 employers last year and 264 this year) including factory owners had to cease operations because of the pandemic.

“Some 12,231 local workers were affected by the pandemic.

“According to statistics, 9,512 workers lost their jobs last year and another 2,719 were laid off this year,” he said in his winding-up speech.

He said RM5.2mil was allocated under Johor Budget 2022 to implement initiatives to upskill Johoreans.

“The initiatives are expected to benefit 1,550 individuals,” he said. 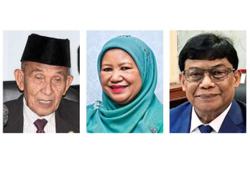