He said RM600,000 would be allocated for instalment of the GPTs in Taman Tampoi Utama, Taman Johor and Jalan Abdul Samad.

GPTs are designed to remove all types of gross pollutants, including sediment as well as oil and grease from storm waters.

“The environmentally-friendly rubbish traps will help to reduce rubbish pollution in waterways and improve the cleanliness level of the rivers, Noorazam said at the MBJB full board meeting.

He said the traps would also prevent disease outbreaks as well as reduce the use of manpower to ensure the cleanliness of rivers and drains in the city.

The mayor said existing water pumps that failed to function properly during heavy rain and high tide was one of the reasons certain areas in Johor Baru were hit by flash floods.

“This project is expected to be completed by August next year,” he said.

He also announced that the city council would upgrade the Sungai Segget pump house, pump system at Masjid Kolam Ayer and Surau Kampung Tambatan at a cost of RM4.5mil.

He said a study on the Sungai Tebrau basin would be conducted to provide plans for the conservation and improvement of the environment within the river basin.

Noorazam said 18,955ha or 75% of the river basin was located within the city council’s jurisdiction and Sungai Tebrau was one of the main rivers in Johor Baru district.

“The study is expected to be completed by November next year and we are looking at developing the river for recreational, tourism and biodiversity activities,” he said.

On the upgrading and beautification project for areas surrounding the Johor Baru Customs, Immigration and Quarantine Complex, he said work would start next year.

He added that the RM5mil project would include various components, including landscaping, lighting, improving the streetscapes, painting murals as well as putting up a signboard to welcome visitors.

Also to be implemented next year is a study on the Smart City Special Action Plan, in line with the status of the city which has been chosen as Malaysia’s “Smart Pilot City”.

“We have also been selected to be a member of the Asean Smart City Framework,” said Noorazam.

He disclosed that a Smart Centre, costing between RM3mil and RM5mil, would be set up at Level 15 in Menara MBJB to carry out data integration and monitoring. 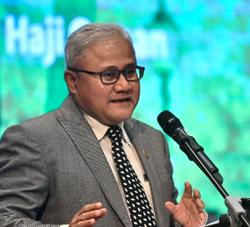