He hopes to focus on building good relations with the city’s stakeholders and reviving the economy in a post-Covid-19 landscape.

“My focus, like at any other local council, is on the people’s well-being.

“This will be done with councillors and the local communities,” he said.

He said he would meet the ratepayers to understand their concerns and fulfil their requests if the city council was able to.

“If we are not able to, we will need to explain to them,” he said.

During the meeting, MBPJ councillor Suriase Gengiah asked about MBPJ’s Health Department director post that had been vacant for four years.

Suriase, who raised the matter even at last month’s full board meeting, asked for clarification.

Mohamad Azhan said he was informed that MBPJ had posted an advertisement on Oct 25 calling for candidates to apply for the post.

“Interested candidates can submit their applications over a two-week period.

“We will shortlist the names and invite potential candidates for interviews.

“We hope the new director can start work by December,” he said.Mohamad Azhan said preference would be given to a candidate with a medical background and experience in the field of either medicine or environmental health.

Deputy mayor Sharipah Marhaini Syed Ali said for now the duties of the Health Department director were carried out by an acting officer of Grade 48 level.

“The acting officer has been performing his duties well and overseeing Covid-19 related operations.

“But we are looking for someone in the Grade 52 level for the director’s post.

“As a full-service agency, we have an Appointing Committee to hire officers for certain posts. This committee comprises the mayor, council secretary and a councillor,” she said.

Mohamad Azhan took his oath as the new mayor ahead of the full board meeting yesterday. His appointment is effective Oct 21.

Mohamad Azhan has a Bachelor of Science degree in Human Resource Development from Universiti Malaya and 24 years of experience in the civil service at state and ministry levels.

He takes over from Datuk Mohd Sayuthi Bakar, who left in May to serve as Immigration Department deputy director-general (operations). 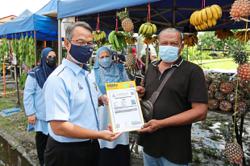