WHEN heavy rain exceeds half an hour, residents at Valencia Apartment in Shah Alam become anxious.

Student Muhd Azin Ismail, 17, said many times cars stalled and their drivers would have to call a mechanic.

“The matter has been brought to the attention of Shah Alam City Council (MBSA), Drainage and Irrigation Department (DID) and elected representatives, but no solution has been found,” he said.

Manan added that during continuous rain, there was backflow from the roundabout at Persiaran Budiman into the monsoon drains along Jalan Gemilang 25/1 that caused water to flow into Jalan Tokoh 25/28.

“This is also a low-lying area,” he added.

Ravi Jeyaram, 55, said residents were unable to use the roads each time it rained.

“MBSA should build a retention pond close to Sungai Klang and widen the monsoon drains from Valencia Apartment and the surrounding area,” he suggested.

Ravi said the flooded roads posed an even greater danger to motorists at night.

“They cannot make out the sides of the road and may drive into flooded drains,” he added.

“The drains are being widened to accommodate the surface runoff water.

“DID is also upgrading the water pump capacity to address the issue,” he said. 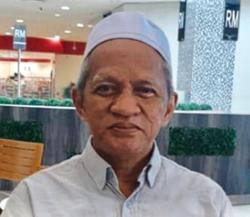