THE authorities will wait for a full report from the Malaysian Institute of Public Works (Ikram) on a landslide in Bangsar before deciding on the next course of action.

"As soon as I received a message about the incident, I sent my deputy and officers to check on the area. Some affected residents will have to move for the time being," he said on Sunday (Oct 24).

The minister was commenting on an incident that occurred at about 7pm on Saturday (Oct 23), where a 40m stretch of road was affected when a retaining wall on Lingkungan Negeri Sembilan in Bukit Bandaraya collapsed.

It is unclear how many houses or residents were affected when the wall collapsed, which is believed to have been due to a downpour in the evening.

Deputy Federal Territories Minister Datuk Seri Jalaluddin Alias urged for a long-term study on the root cause within three months.

"The relevant authorities will carry out the related preliminary works within two weeks," he said in a post on his official Facebook page on Sunday after visiting the site.

The ministers were met after launching the countdown to the 50th anniversary of Kuala Lumpur City Hall (DBKL) at the Kuala Lumpur Tourism Bureau in Jalan Tangsi with mayor Datuk Seri Mahadi Che Ngah.

Meanwhile, in a post on Twitter, Lembah Pantai MP Fahmi Fadzil urged for an immediate action by DBKL.

"I have spoken to the residents association chairman and DBKL. This is the second incident in this area in the past few months," he said.
Article type: metered
User Type: anonymous web
User Status:
Campaign ID: 46
Cxense type: free
User access status: 3
Join our Telegram channel to get our Evening Alerts and breaking news highlights 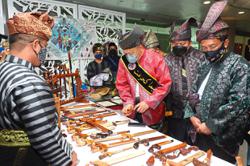 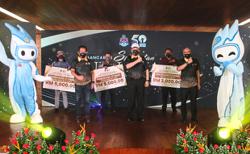