Repair work is ongoing at the mid-section of Kek Lok Si Temple where the fire broke out.

THE 130-year-old Kek Lok Si Temple in Penang is open to the public, except the mid-section where one of the prayer rooms in the main shrine hall was damaged in a fire.

“Both entrances from the hilly road leading to Ayer Itam Dam at the temple are open for devotees to enter for prayers.

“Only the mid-section area where the fire broke out earlier is closed for repairs.

“The temple has been opened since early September after the government announced the reopening of places of worship.

“Devotees have to follow the standard operating procedure to ensure their safety and good health,” he said.

Last Tuesday, a fire gutted the annex of one of the newer structures. However, the 121-year-old Sanskrit bell in the room was unscathed in the fire believed to have started from a lit oil lamp.

Ooi said they had to close the mid-section of the temple as the area needed to be cleaned up and renovated to ensure the people’s safety.

“Although the portion that caught fire is less than 1% of the entire Kek Lok Si Temple complex, we have decided to close the area to avoid any accidents.

“We are working hard to handle the aftermath of the blaze.

“We have sped up repair work and are in the middle of calculating the losses caused by the fire.

“During the movement control order, we took the opportunity to renovate one of the prayer halls and pagoda,” he said in a phone interview on Saturday.

Located in Ayer Itam, Kek Lok Si — which means Temple of Supreme Bliss — is said to be the largest Buddhist temple in South-East Asia, and arguably the most famous in Penang.

The hills in the area have traditionally been regarded as having all the right feng shui for a temple.

The temple’s construction began in 1893 and was inspired by the chief monk of the Goddess of Mercy Temple in Jalan Masjid Kapitan Keling back then.

The Manchu Emperor Guangxu approved of the project, bestowing a tablet and gifting 70,000 volumes of the Imperial Edition of Buddhist Sutras. 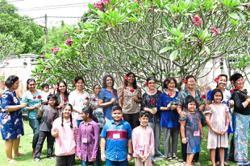