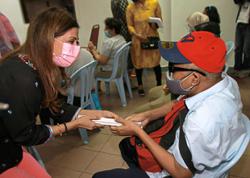 PARALYMPIAN Wong Kar Gee had never considered his blindness an obstacle in attempting to achieve his life goals.

He earned the opportunity to participate in the Tokyo 2020 Paralympic Games, which gave him the best experience ever even if he did not win a medal.

“When I was preparing to leave for Tokyo, I was told by the Paralympic Committee that I did not need my guide there as I was not totally blind.

“And my coach couldn’t make it due to the quota placed on attendees.

“But in any case, I had my fellow athletes and their coaches from Sabah there, who turned out to be a tremendous help,” he said.

Wong, 30, who competed in the long jump category, has Stargardt disease which has resulted in his retina deteriorating.

He has lost most of his central vision but his peripheral vision remains sharp.

“I was eight and could not see the pages of my piano book during a lesson.

“I found out later that it was hereditary even though my family members had never been afflicted,” he said. Another Paralympian, Nur Azlia Syafinaz, 23, a tandem cyclist at the Tokyo Games, said it was her teachers who inspired her to take up sports.

Nur Azlia, who has congenital blindness, said she had learnt to live with her condition due to her early diagnosis and primary education at a special school, SK Pendidikan Khas Alma in Bukit Mertajam, Penang.

Despite a hiccup during her first round at Fuji International Speedway, she still described the Games as a valuable learning experience.

“I was separated from the rest of the athletes since my training quarters was at Izu Velodrome, a three-hour journey from Tokyo.

“The International Paralympic Committee was very accommodating and I had my teammates and coach there to help familiarise me with the area,” she said. Now a masseuse, Loo worked as a bank telephonist for 10 years.

Meanwhile, Anna Loo Soon Nyong, 51, a masseuse from The Blind Touch massage centre in Brickfields, Kuala Lumpur, said she became visually-impaired at 15 due to cortical blindness from meningitis that affected her spinal cord.

Loo considers herself lucky because after leaving school, she was awarded a scholarship to attend a one-year course in computer science and information technology at Overbrook School for the Blind in Philadelphia, United States in 1991.

She then worked as a bank telephonist for 10 years before resigning.

Malaysian Association for the Blind (MAB) services unit senior manager Jacqueline Emmanuel called on Malaysians to treat the visually impaired as equals, saying that they should be given more job opportunities. Emmanuel says the visually impaired should be given more job opportunities.

“Visually impaired people are not a hindrance,” she said.

Emmanuel lost her vision in her late 20s due to retinitis pigmentosa, a rare genetic disorder that affects the retina cells’ ability to respond to light; this leads to cloudy vision and in some cases, blindness.

“I was taught to use a computer specifically in screen reading and it has helped me a lot in my work and daily living,” she added.

In conjunction with World Sight Day on Oct 14, MAB distributed 300 food baskets to the visually-impaired community in Kuala Lumpur and Petaling Jaya.

According to Welfare Department statistics, there are 51,457 visually impaired registered nationwide. — Bernama 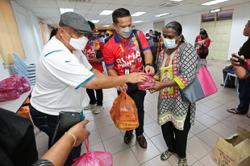