Banners like this have been placed around Brickfields to reassure customers that necessary precautions are in place.

AFTER the absence of Deepavali bazaars last year in Kuala Lumpur, only one is allowed this year, but with strict conditions imposed to ensure everyone’s safety.

The bazaar, that started on Oct 5 in Brickfields’ Little India with a limited number of lots, will continue until Nov 3 and is open from 10am to 10pm.

Deepavali falls on Nov 4 this year.

In previous years, prior to the Covid-19 pandemic, Deepavali bazaars were held in the weeks running up to the festival in several areas in Kuala Lumpur, including Bukit Jalil, Brickfields and Jalan Masjid India.

This year, DBKL has allocated a total of 80 lots to be set up in Lorong Chan Ah Tong, Jalan Tun Sambanthan, Jalan Rakyat and in front of Kompleks Tun Sambanthan.

In a media statement, Kuala Lumpur City Hall (DBKL) said this year’s bazaar was coordinated by non-governmental organisations that applied to manage the site. Jascika (right) is glad to be able to finally sell stock she pre-ordered before the MCO. — Photos: CHAN TAK KONG/The Star

“Applications received from the organisers were processed and reviewed by DBKL for site approval.

“The site suggested by the organisers was approved by DBKL.

“There was no balloting. The organisers were responsible for allocating the lots,” DBKL said in the statement.

Persatuan Prihatin Peniaga Kecil Little India secretary P. Thinakaran said it was only able to secure 30 vendors for this year’s bazaar because of the short notice.

“DBKL only confirmed early this month that the Deepavali bazaar would be allowed this year.

“Initially, it approved 60 lots but most of the previous bazaar vendors said they would not have enough time to import their stock,” he explained.

He said stalls had been set up along Jalan Tun Sambanthan, Jalan Rakyat and Lorong Chan Ah Tong in Brickfields.

Some of the tents that were set up in front of Tun Sambanthan Complex would be removed as there were no takers for those lots.

“This is the first bazaar since the Covic-19 pandemic started.

“We need to ensure the standard operating procedure (SOP) set by the government is adhered to.

“The vendors, including their assistants, are fully vaccinated and we are monitoring the entrance and exit points,” said Thinakaran.

He said they expected the crowd to peak by next weekend.

Canopies selling a variety of products, including traditional delicacies, clothes, spices and decorative items can be seen lining the streets of Little India.

Keen on selling her Deepavali stock was Jascika Jabi, 30, who runs B-Bow Collections.

“We initially pre-ordered in anticipation of the Deepavali bazaar last year.

“Due to the pandemic and MCO, I now have boxes of unsold items.

“Luckily, the bazaar is taking place this year,” she said.

Premalatha Subramaniam, who sells Indian prayer items, said it was good to feel the festive ambience return to the city.

“Now that most of us have been fully vaccinated, things are slowly getting back to normal.

“Of course we are also concerned about our health and safety, but we will follow the SOP,” she said. 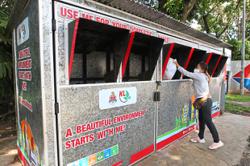