Barricades knocked down at the playground that was sealed off by DBKL for upgrading work. — LOW LAY PHON/The Star

A PUBLIC park in Jalan Pria at Taman Maluri, Cheras that was cordoned off by Kuala Lumpur City Hall (DBKL) for safety reasons and to facilitate upgrading work, has been breached.

According to residents, the area now looked worse than before.

After complaints that the park looked like a war zone following a recent thunderstorm, the local authority responded immediately by cordoning off the area with safety barricades and hoardings.

The thunderstorm caused damage to the park’s facilities, including the jogging track, playground, benches and futsal court.

The park was then closed for upgrading work. Notices were placed around the park and on the hoardings informing the public of the closure.

But barely two days had passed before intruders pushed aside the safety barricades, creating another mess.

When contacted, a DBKL officer said a team would be sent to reinstal the barricades, seeing that it was a safety issue.

“Any more tampering will only delay the planned upgrade.

“We will take action against those caught removing the barriers or encroaching into the park.’’ — By BAVANI M 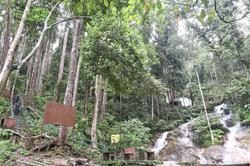