A jogger looking at a van using the jogging track at Taman Metropolitan Kepong.

JOGGERS at Taman Metropolitan Kepong, Kuala Lumpur are irked by the nonchalant attitude of motorists who misuse jogging tracks and endanger park users.

They said hawkers — who have set up stalls inside the park — were driving vans on the jogging track to ferry their equipment.

Frequent jogger Goh Leng Ang, 69, said, “The vehicles enter through one of the gates, and this happens regularly. We are worried that the vehicles may run into people exercising in the park.

“The hawkers are also messing up the place as there is rubbish strewn all over.”

Jogger Nur Suraya Ahmad, 31, said she had been startled numerous times by vehicles that appear behind her on the track.

“While jogging, I listen to music with earphones. I am concerned for my own safety as well as that of other joggers.

“The vehicles should not be allowed onto the jogging track,” she added, urging Kuala Lumpur City Hall (DBKL) to penalise them.

There are three entrances to the park — two via the Middle Ring Road II (MRR2) and the third one is situated at the back of the park, along Jalan Metro Perdana Barat.

Kepong Community Service Centre head Yee Poh Ping said the vehicles entered through the second entrance, from MRR2, to set up stalls at a spot near the first entrance.

“This entrance to the park was initially closed to facilitate the construction of a multistorey carpark.

“When it was completed, the first entrance was reopened but bollards were installed to prevent vehicles from accessing the park.

“The hawkers were then forced to use the second entrance, and inadvertently misuse the jogging track to get to their destination,” he said.

Yee suggested relocating the hawkers to the carpark’s ground floor or have the bollards removed.

“It is better if the carpark is relocated as it would prevent the hawkers from dirtying the park,” he added.

When contacted, DBKL acknowledged the matter but had yet to comment at press time. 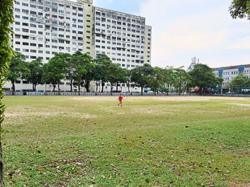 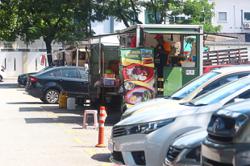