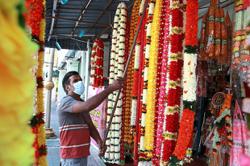 Kalyani says some customers make appointments to visit the shops.

TRADERS at Little India in Jalan Lahat, Ipoh in Perak, have urged Ipoh City Council not to allow the Deepavali bazaar to be held this year.

Little India Traders Association chairman B. Kalyani said many shopowners were against having a bazaar as they feared it could cause an outbreak of Covid-19 cases.

Kalyani learnt that a businessman — not from the Little India community of merchants — was planning to hold a bazaar.

“If the bazaar is held at Little India, it will attract a huge crowd, especially during weekends.

“It is worrisome as people may just come here, take their time to browse and end up not buying anything,” she said when contacted.

“We may not be able to control the crowd in front of our shops or fully follow the standard operating procedure (SOP).

“Even though the number of Covid-19 cases is going down now, we still do not feel safe.

“The business community here is against having a bazaar and I don’t think the city council should approve an event that may cause a huge gathering of people,” she added.

Prior to the Covid-19 pandemic, the Deepavali bazaar used to be held annually over two weeks before the festival.

Canopies, tents and stalls would be set up in front of the shops selling a variety of products, including traditional delicacies, clothes, spices, kacang putih, henna art, fresh flowers and decorative items.

Deepavali falls on Nov 4 this year.

Kalyani said most shopowners and their staff were also apprehensive over the bazaar as businesses had been severely impacted by Covid-19.

“Some shopowners and staff members had died from the disease.

“Some of the association members and their family members had also been infected, which was the main reason why some shops had remained closed,” she said, adding that there were about 90 shops in the area.

“But as Deepavali is nearing, we have no choice but to reopen our businesses in order to survive.

“I understand that we need to accept living with Covid-19 and we are just appealing to the relevant authority to help make it safer for us,” said Kalyani.

She highlighted that most shops were already understaffed and were doing their best to follow the SOP at their respective premises.

“Many shops do not force their workers to come to work as we understand that they may have elderly folk and children at home,” she said, adding that some customers had already made appointments to visit the shops.

“They would reserve a timeslot to come with their children, sometimes early in the morning when there were fewer people in the area.

“A worker would attend to them during the agreed upon period.

“Since there are ample parking bays now without the tents and canopies, our customers are happy with such an arrangement as it is more convenient and comfortable for everyone,” said Kalyani.

She had written to the mayor about the bazaar issue.

“We feel that no one should be allowed to have canopies or tents outside the shops.

“This month is crucial for us to cover our losses, which has been substantial during the pandemic.

“We just cannot afford to have an outbreak, which may force the area to be shut down.

“Perhaps when the situation returns to normal and the pandemic has been contained, we can consider having the bazaar again,” she added.

When contacted, a city council spokesperson said it had yet to make a decision on holding a Deepavali bazaar this year.