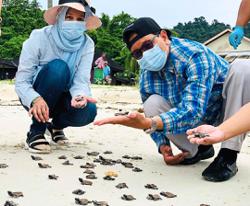 The coral-eating crown-of-thorns starfish population has to be controlled so that the corals in Sultan Iskandar Marine Park could remain sustainable.

THE Johor Fisheries Department has removed 112 coral-eating crown-of-thorns starfish (COTS) in the Sultan Iskandar Marine Park as part of marine life protection efforts in the area.

Its director Zainudin Abdul Wahab said the COTS were removed from around Pulau Aur and Pulau Pemanggil last month.

“The operation was led by the marine park resource management and protection unit with help from islanders.

“The programme is crucial to control the COTS population from any outbreak and protect our corals from being destroyed,” he told StarMetro.

He highlighted that if left uncontrolled, increase in the COTS population would eventually lead to coral extinction.

“The best way of removing them is by injecting them with vinegar, which will kill them and subsequently other fish will feed on them.

“Previously, we would move the COTS to other locations, which was not a good idea as this would put them in distress and cause a spurt in eggs,” he explained.

Zainudin said COTS preyed on hard corals, such as those of the acropora and goniopora species.

“This is one of our ongoing programmes, and it is one of the best methods we use to protect our corals aside from ensuring sustainable breeding and feeding grounds for our marine life,” he added.

Aside from the COTS culling programme, the department also conducts awareness programmes and information-sharing sessions at the marine park.

“These include our community outreach, reef-watchers and reef-caring programme, public visits, collaborations with universities, government agencies and departments, as well as partnerships with NGOs.

“We also share information on turtle and dugong protection at our information centre at Pulau Tinggi, Mersing,” said Zainudin. — By REMAR NORDIN