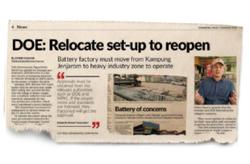 Representatives from the NGOs at MPKL headquarters in Banting on Friday to send the memorandum.

A COALITION of 11 non-governmental organisations has submitted a memorandum to the Kuala Langat Municipal Council (MPKL) to oppose the reopening of a battery factory in Jenjarom, Kuala Langat.

They also urged the council to invite civil societies for a discussion to get their views.

“MPKL shouldn’t issue a licence to any industrial facilities to operate near settlement areas as this will endanger the safety of residents.

"We also urge the council to make public all the reports by the state agencies in 2019, which led the state government then to revoke the factory’s licence," they said in a statement on Saturday (Sept 25).

In 2019, investigations by the authorities found the factory responsible for lead pollution.

The then-state environment, green technology and consumer affairs committee chairman Hee Loy Sian ordered the facility to cease operations and move out of the area.

But another company had since bought over the facility and planned to reopen it.

In a StarMetro report on Saturday, MPKL said it had given the factory a temporary licence, subject to periodic reviews for two years.

Several conditions were attached, which included a soil and water study of the surrounding areas every three months, no discharge of effluent to nearby water bodies and no increase in production capacity.

The coalition questioned the rationale for the approval, as the factory was sited within 500m from several schools, mosque and surau, as well as several housing areas.

They highlighted an incident in 2017, when a fire destroyed 80% of the facility, resulting in the harmful release of 1,200 tons of raw materials.

“This is a heavy industry factory and shouldn’t be allowed to operate in a medium industry zone,” they added.