Wee (right) and his service centre supervisor Tan Eng Meng (centre) handing out mooncakes and food in conjunction with the Mid-Autumn Festival.

THE Tanjung Piai MP service centre distributed mooncakes and other food items to constituents in conjunction with the Mid-Autumn Festival.

“The items were distributed via a drive-through, whereby recipients came during different time slots to avoid congestion and minimise physical contact.

“We wanted to spread some festive cheer as this is the second Mid-Autumn Festival since the first movement control order was enforced in March last year.

“Many families are still unable to reunite for the celebration due to travel restrictions and border closures,” he said.

He added that since the Covid-19 pandemic started, his service centre had given out more than 80,000 sets of food to affected families.

Besides that, Wee said 30,000 eggs, contributed by a farm to the needy, were also distributed.

Food baskets, fresh vegetables, seafood and fruits are given out from time to time to underprivileged families.

“In the past few months, quite a number of people from the B40 and M40 groups have come to my service centre seeking assistance.

“They told us they were having difficulties in finding jobs due to the pandemic,” said Wee.

He also thanked service centre volunteers for their help during the distribution process. — By YEE XIANG YUN 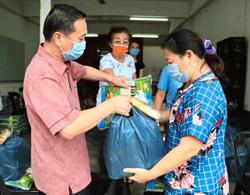