RESIDENTS who were affected by the landslide along Jalan Kemensah Heights in Ampang Jaya last Friday want an update from the relevant Selangor authorities regarding the state of their properties.

Kemensah Resident Committee (KRC) chairman Mohd Fazil Abdullah said despite reaching out to the authorities, they had not been provided any information.

“We want to know what is going on,” he told StarMetro, adding that the landslide which took place on Sept 17 was “a nightmare”.

He said he received the distress call from his committee members regarding the incident at 9pm.

“I rushed to the site and saw trees falling and that one of the bungalows had given way.

“By then, the residents had managed to evacuate from their homes,” he said, adding that the landslide affected three bungalows and 12 townhouses involving 27 families.

A total of 103 residents were evacuated.

According to Selangor Fire and Rescue Department, the landslide was caused by movement of underground water following heavy rain in the area.

The State Disaster Management Authority declared the affected area as a disaster site.

Selangor Mentri Besar Datuk Seri Amirudin Shari said the reason for this was all the houses in the affected area — including three bungalows, namely lots 6, 8 and 10 — were still unsafe for occupation and he feared that further earth movement could occur.

To ease the burden of the families, the state government is giving a special assistance of RM500 to each family.

Currently, the site has been sealed off and no injuries have been reported. Slope remedial work has begun at the site.

Mohd Fazil added that development along the slope over the years might have contributed to the disaster.

“The river flow was redirected before, which may have caused soil erosion.

“Any development on a slope is too risky and poses a safety hazard,” he said.

Last year, Mohd Fazil and his committee members protested against the development of a 274-unit apartment block on the slope in Taman Kemensah Heights.

“MPAJ had immediately covered the affected slope area with tarpaulin sheets to prevent erosion and will continue to monitor the situation,” she said.

Hulu Kelang assemblyman Saari Sungib shared on social media that DID would begin site clearing and culvert installation to divert the river flow.

Saari was not reachable for further comments at press time. 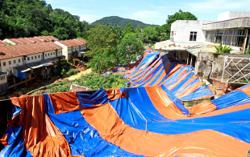