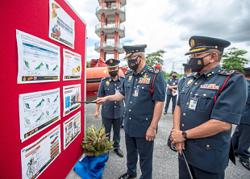 TWO photographers of The Star have grabbed top honours at the Penang Green Journalism 2021 Awards, cornering the champion and first runner-up awards in the photojournalism category.

Chan Boon Kai came out top for his picture of the aftereffects of the rainy season while Lim Beng Tatt bagged the first runner-up place for his photo depicting sweltering weather in Penang.

Chan’s entry titled ‘Working 10 Hours Daily to Keep River Filth-Free’ earned him a cash reward of RM1,200 and a certificate of appreciation.

“This is the second time I have won a Penang Green Council award and the first time I have received the champion prize,” said Chan, 39.

“The photo was taken during the rainy season in Penang.

“The council workers clean up and sweep rubbish every day, pretty much invisible to the public eye.

“I hope this photo will get the attention of the public.

“The council workers risk their health by putting themselves in such a dirty environment to get rid of our garbage.

“I hope everyone will now pay attention to the environment surrounding them and throw away their rubbish properly.

“Everyone needs to be responsible for taking care of our Mother Earth,” said Chan.

Lim’s picture titled ‘Another Hot Day’ earned him RM1,000 and a certificate of appreciation.

“This is my first time receiving an award from Penang Green Council.

“I wanted to show how warm the weather was and it was difficult to find the perfect shot.

“We spent quite some time looking for angles and a good location.

“Komtar seemed like a nice backdrop to represent the state,” said the 40-year-old shutterbug.

Lim’s photo depicts Komtar under a cloudless sky while a girl drinks from a water bottle with the brilliant sun shining through.

The awards in the feature writing category went to Balkhis Awang Ahamad (Bernama) in the Bahasa Malaysia category, Audrey Dermawan (New Straits Times) in the English category and Ooi Choon Nam (Oriental Daily) in the Mandarin category while M. Suguna (Malaysia Nanban) won a special award for her article in Tamil. “To pick the articles, we looked at their green newsworthiness, facts, research quality and quality of writing.