A PROPOSAL to build a 45-storey residential apartment block in Section 91A near Jalan Palong, Taman Miharja in Kuala Lumpur, has caused unease among residents living in and around the area.

The development proposal involves two plots of land, where one plot contains an open space with a football field and jogging track.

However, no information is given on the fate of the land except that it will be surrendered to Kuala Lumpur City Hall (DBKL) after completion of the project.

Proposed on the second plot is a 45-storey apartment building with 1,168 units, including eight podium floors with facilities.

While residents are not against the development itself, they are unhappy with the area’s new population density, which will increase to 1,000 people per acre.

“I am not against this development, since it is an affordable housing scheme for first-time house buyers, but Taman Miharja is a mature township with thousands of residents and we already have several huge projects coming up in the vicinity,” said Miharja Condominium 3A’s Joint Management Body (JMB) chairman Namsuvayam Murugian.

Namsuvayam anticipates that the project will have a huge environmental impact on the area if it is not scaled down.

“I foresee a lot of roadside parking and double-parking as more cars will be coming in and out of the area.

“Each unit is bound to have more than one car,” he said.

“We hope that mitigating factors are put in place such as planting more trees and shrubs around the area to curb pollution and greenhouse gases,’’ he said.

He pointed out that DBKL must also look at improving and repairing infrastructure such as drains, roads and streetlights in the area as these were old and breaking down.

“The existing infrastructure may not be able to cope with more people moving into the area, so we hope our concerns will be taken into serious consideration,” Nathan added.

A.H. Lim, who lives nearby, urged the authorities to look into the growing number of roadside stalls along Jalan Palong, as these were contributing to traffic congestion in the area.

However, foremost among the residents’ worries is the fate of the open space.

“According to a development signboard at the site, this land will be surrendered but what does that mean exactly?” Namsuvayam asked. “We want the field to remain as it is the only green lung in the area and DBKL must protect it,” he said.

He added that residents had already sent in their objections to DBKL on Sept 1 and they hoped that DBKL would take into consideration the people’s concerns and scale down the project.

The size of a unit under the scheme is now 900sq ft, from the previous 800sq ft.

The maximum density is now 1,000 occupants per acre, with unit sizes being bigger and it is open to only first-time buyers.

When contacted, a DBKL officer from the Planning Department told StarMetro that density limit had increased because the units were bigger.

However, he assured residents that their objections, which were received as per Rule 7 of the Planning (Development) Rules 1970, would be given due consideration. 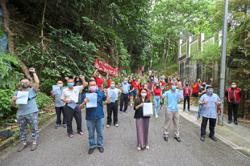