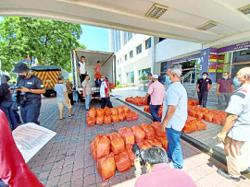 Previously, only seven product categories were allowed to be sold at open-air morning markets, night markets and bazaars.

Now, all categories are allowed to reopen for business at outdoor markets in the city.

The new SOP also states that licence holders and their workers are not required to be fully vaccinated to operate at the markets.

However, visitors to these places must be fully vaccinated.

Kuala Lumpur Night Market Management Association president Gulam Muszaffar Gulam Mustakim said this was great news for traders, especially those selling clothes and accessories as they had been deprived of doing business for several months.

“The traders are happy they are now able to operate again.

“Even though more are allowed to trade again, there should not be a problem as the organisers will ensure the night markets operate at 50% capacity,” he said.

Gulam Muszaffar said that previously, night market traders would decide among themselves on who would get to trade so that everyone had a fair chance to do business.

“For example, some traders would take fewer lots so that the extra lots would be allocated to other traders.

“When Kuala Lumpur moves into the third phase of the National Recovery Plan, we plan to appeal to the authorities to increase night market capacity to 70%,” he said.

Gulam Muszaffar also said the association would continue to appeal to National Security Council (NSC) and DBKL to extend night market operation hours, which were currently from 4pm to 8pm.

“We hope the authorities will extend operating hours to 10pm.

“Most of the shops and eateries are allowed to open until 10pm, so we are puzzled why night markets are given a shorter operating time,” he said.

Kepong Baru Morning Market Trader Association adviser Yee Poh Ping said some of its members, who had not been operating for a few months, were delighted with the new decision by DBKL.

“Traders who were selling clothes, shoes and kitchenware were not allowed to operate previously and they were badly affected as this was their sole income.

“With the new SOP, they can decide whether to reopen or not.

“We expect more traders to start operating by this weekend,” he said.

Yee said he had been appealing to DBKL and the Federal Territories NSC for a long time to allow all traders to operate.

“The move to allow only the seven product categories to be sold at morning markets was unfair as clothing stores were already allowed to operate,” he added.