Rumaizi (right) and Mohd Azhar showing the blueprint for the solar energy system that will be implemented by the council.

Ipoh City Council (MBI) wants to instal more photovoltaic solar panels on its properties in line with its plan to be a smart and low-carbon city by 2030.

“We will continue doing so with our other buildings,” he said in a press conference after visiting the electrical room at UTC.

“Next, we are planning to instal the solar panels at sports facilities, including Stadium Indera Mulia, Tuanku Zara Aquatic Centre and maybe Perak Stadium,” said Rumaizi.

He planned to encourage installation of solar panels at all government buildings in the city next.

The mayor said the installation work at UTC was completed in July after a Renewable Energy Supplies Agreement was signed with Tenaga Nasional Bhd and GSPARX Sdn Bhd in March.

The solar-energy project, he said, was expected to save the city council up to RM2.5mil over 21 years.

“In August alone, the electricity bill at UTC reduced by about 22%,” he added.

“Based on the system’s projection in the electrical room, this technology can save about 47 trees a year,” he said, adding that carbon emission was also cut by 70%.

Carbon emission, he said, had impacted climate change globally and the city council wanted to do its part to be more environment-friendly.

“We have often read about the icebergs in the Arctic melting because of climate change.

“About 10% of the land on Earth will submerge, including Malaysia, so we need to change our way of life by lowering our carbon footprint, using new technologies and moving towards sustainable living,” he said. 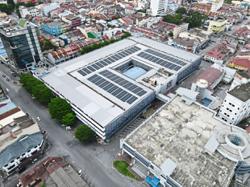