Ooi posing with one of the 24 murals he painted at SJK(C) Poi Eng in Gertak Sanggul, Penang.

WHEN students return to SJK(C) Poi Eng in Gertak Sanggul, Penang, they will find their school looking much more vibrant than before.

There are now 24 murals adorning its walls, all painted by local artist Ooi Kok Chuan to mark the country’s 64th National Day celebrations.

“The school wanted a series of new murals to replace the existing ones done many years ago which have already faded.

“It took me six weeks to complete them all,” Ooi said, adding that the work was split over two periods in May and August.

The final strokes were done on Aug 18.

The scenery and daily life of Gertak Sanggul were the main subjects chosen after discussions with headmistress Liew Siat Jin.

There are panels depicting fishing boats at sea and fishermen harvesting shellfish next to the rambutan trees, orchids, morning glories and birds commonly seen in the area.

“With less development compared with other areas in Penang, Gertak Sanggul retains its old-world charm and laid-back lifestyle.

“We wanted to celebrate this,” the artist shared.

Also featured are national symbols like batik, wau bulan and hibiscus as well as other flora and fauna with inspirational quotes espousing virtues like hard work, perseverance and self-improvement.

Ooi hoped these would motivate the children and at the same time, foster patriotism and love for the country.

In a video posted on the school’s social media page, Liew said: “The murals beautify the school’s surroundings and make it a more conducive place for studying.”

Ooi also painted eight murals on the walls of the Dewan MPKK (Village Community Management Council) nearby. These sport marine life and greenery.

The artist, who is also Penang Chinese Brush Art Society secretary and Balik Pulau International Art Village deputy chairman, said he felt privileged to be able to contribute to the local community through art.

Earlier in February, he also did a giant mural for the Chia Liang Kok Charitable Society building in Pulau Pangkor, Perak.

He intends to do more such collaborations for local institutions and organisations. One of the murals depicting two children flying a Wau Bulan.

Fishing boats at sea, flowers and birds can be seen in this mural.

A section of the giant mural Ooi completed in Pulau Pangkor. — Filepic 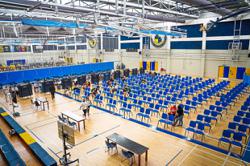