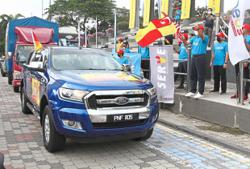 IN LINE with this year’s National Day celebration theme of Malaysia Prihatin (Malaysia Cares), a newly formed volunteer group dispatched food supplies to about 1,000 families affected by the floods in Yan, Kedah.

The 50 members from Selangor Volunteers (Serve) loaded a three-tonne lorry with basic food items worth about RM50,000

On hand to flag off the lorry and several 4WD vehicles at Dataran Shah Alam in the state capital was Selangor youth generation development, sports and human capital committee chairman Mohd Khairuddin Othman.

“Our mission is to help villagers and those in residential areas badly affected by the floods,” he said.

On Aug 18, several villages and residential areas around Gunung Jerai were hit by floods, believed to have been caused by water surges at the waterfalls near the foot of the mountain. Six lives were lost.

Mohd Khairuddin said Serve was made up of concerned youths who wanted to help the flood victims.

“Others in the Serve team plan to clean up the area around the affected homes,” he said.

He said Prime Minister Datuk Seri Ismail Sabri Yaakob had emphasised the important role youths should play, noting that efforts like these were very much appreciated.“I am impressed with Serve and its members’ willingness to help the people.

“Those who want to join this volunteer group can do so through service centres in their respective constituencies,” added Mohd Khairuddin.

Selangor government aims to have some 2,800 members in its 56 constituencies before the end of this year and 5,600 members by next year.

Meanwhile, Serve’s Kedah mission head Ahmad Danish Hairudin said this was the first time they were carrying out such an initiative.

“The victims not only have to cope with the floods but also the Covid-19 pandemic, which is why we wanted to help them,” he added. 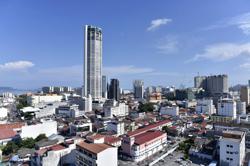