All hands on deck to help the needy

Chow (front row, centre), together with the partners of the alliance taking a group photo after the launching of PgCare Alliance. – courtesy of Buletin Mutiara

EIGHTEEN local non-governmental organisations (NGOs), associations, industry players have come together to form the PgCare Alliance to help the needy during this difficult Covid-19 pandemic.

Its adviser Chow Kon Yeow, who is also the Penang Chief Minister, said the state would collaborate closely with the alliance to provide faster aid to needy Penangites.

“The pandemic has been going on for almost two years and many NGOs have stepped forward to work with the state government to help those in need.

“The state may have entered the second phase of the National Recovery Plan but there are still various challenges caused by the pandemic which we are still facing,” he said, adding that this had also impacted the mental health of many people in Penang.

Chow, who launched the alliance on Wednesday in Komtar, said some people might have lost their jobs, face financial constraints or even stress from families during this pandemic. 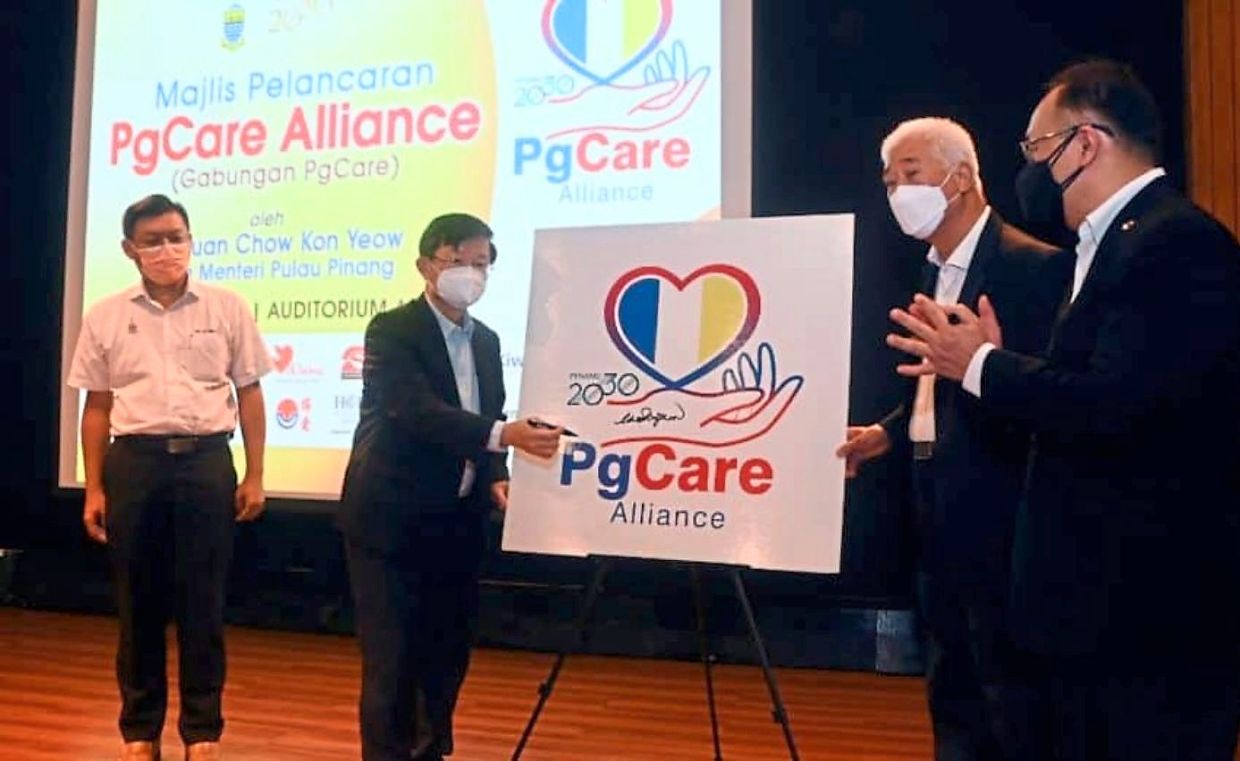 Chow signing on the PgCare Alliance logo to launch the alliance after a simple ceremony in Komtar.

“Befrienders Penang has received more than 6,200 calls over this pandemic period, while D’Home Mental Health Association has also received a spike in calls for help from the public.

“The collaboration between the state and PgCare Alliance is in line with the Penang2030 vision of ‘A Family-Focused Green and Smart State that Inspires the Nation’,” he said in his speech.

Chow later signed the PgCare Alliance logo to launch the alliance after a simple ceremony.

“We will strive to complement each other based on our strengths, to accelerate the assistance required, to avoid duplication of available resources, and to beef up support via a neutral, inclusive and fair platform,” he said.

Chow also said an integrated digital platform will be set up soon to ease communications between partners in the alliance, state assemblyman’s service centres and those in need of assistance.

“The name PgCare Alliance was chosen by the main committee after a number of discussions.

“It can be considered a rebrand of the PgCare contact tracing app which was previously used in Penang before it was integrated with MySejahtera,” he said.

Phee has been appointed as chairman of the alliance with Yeoh and Komtar assemblyman Teh Lai Heng as the deputies.