Perak tourism committee chairman Datuk Nolee Ashilin Mohammed Radzi said this was a drop from the 2019 figure of 21 million.

“The number of domestic tourists dropped because of the movement control order nationwide.

“This is despite the fact that borders were only open for several months, namely in January and February, then from July to November before the MCO was implemented again.

“We hope that when the restrictions are lifted, Perak will be a main focus for local tourists.

“Once more people get vaccinated, we can transition into the third phase of the National Recovery Plan.

“A lot of traders are suffering so we hope to see ‘revenge tourism’ when borders reopen and inter-district travel is allowed,” she added.

Nolee also said several localities were being looked at for the Tourism, Arts and Culture Ministry’s Covid-19 Free Destination, a tourism industry-based vaccination programme for players.

She said these included Ipoh and surrounding districts such as Kuala Kangsar, Kampar and Batu Gajah.

“There are about 2,000 frontliners from the tourism industry in these areas that have yet to be vaccinated from the 5,000 names we received,” she said, adding that the programme would be expanded to Lumut and Manjung later.

“We have submitted the names of those who have yet to be vaccinated to the Covid-19 Immunisation Task Force and are waiting for their approval.

“In Pulau Pangkor, we expect about 80% of those registered for the project to be vaccinated by September,” she said, adding that about 8,000 people on the island were involved.

It had been reported that Pangkor was among several locations nationwide selected for the pilot project under the second phase of the Tourism Recovery Plan.

Nolee said a request had been made to the ministry to reduce the time frame whereby visitors to the island could enjoy duty-free privileges.

“In principle, we have received approval for it to be reduced from 48 hours to 24 hours.

“Visitors only need to stay overnight to enjoy the privilege,” she said, adding that the state was still waiting for official confirmation on this. 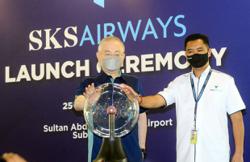