MBSJ’s team demolishing one of the illegally built structures along the kerb of a main road in Kampung Bukit Lanchong, Subang Jaya.

FIVE illegally built structures located along the kerb of a main road in Kampung Bukit Lanchong were demolished by the Subang Jaya City Council (MBSJ) for flouting several regulations.

“MBSJ carried out an operation to demolish the illegally built structures, all of which were roadside stalls, after the owners failed to do it themselves despite being served three notices,” said MBSJ Corporate and Strategic Management Department deputy director Azfarizal Abdul Rashid in a statement.

“The stall owners had built the structures without MBSJ’s permission. The structures were also built on road and drain reserves owned by MBSJ, which are not allowed.”

This was followed by a one-month notice to evacuate and demolish the structure, dated May 31, 2021, under Section 76 (6) of the same Act.

“Following the issuance of the above notices and the owners’ failure to take action, the five illegally built structures were demolished on July 27,” said Azfarizal.

“The demolition was carried out under Section 72 (1) of the Street, Drainage and Building Act 1974 as the stalls were built without the council’s permission.”

The stalls were located along Jalan Besar, Kampung Bukit Lanchong in Subang Jaya.

“The operation was carried out in compliance with the standard operating procedure set by the National Security Council,” said Azfarizal.

MBSJ also carried out several joint operations with the police to ensure businesses that were allowed to operate during Phase One of the National Recovery Plan (NRP) complied with the standard operating procedure (SOP).

The operations were held over the past week at three industrial areas in MBSJ’s jurisdiction.

“The two factories plus 20 business premises and stalls inspected in Taman Perindustrian Seri Kembangan were all found to be complying with the SOP.

“However, one factory had committed an offence by operating without a valid business licence from MBSJ,” said Azfarizal.

“From the three operations, MBSJ issued a total of 11 compound notices on the factory operators for committing various offences under the Trade, Business and Industry Licensing By-law 2007, Advertising By-law 2007 as well as Street, Drainage and Building Act 1974.”

Azfarizal added that MBSJ would continue its periodic monitoring at all areas under its administration and take appropriate action in the event business premises owners, factory operators and the public ran foul of the SOP. 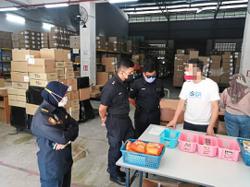