Marwati getting some help from residents of Bandar Baru Tambun residents and Ng (in white) at the community garden.

This, he said, would help the department to monitor such activities.

“Community gardening concepts must get the approval of the city council to avoid future misunderstandings,” he stressed.

Rumaizi was responding to proposals for community gardening projects on council land, including fields and playgrounds in residential areas.

One such proposal is from Ipoh city councillor Prof Richard Ng, who is keen to start a pilot project at a field in Desa Tambun Indah, near Ipoh.

However, the consent of all residents is required before an application is sent to the council.

That way, Ng said, residents would be able to share in the harvest of vegetables, herbs or fruits.

The councillor said community gardening was particularly beneficial to senior citizens as it was therapeutic and a form of exercise while also strengthening neighbourly ties.

“I raised the proposal for a community garden with MBI because many residents have planted vegetables, fruits and herbs outside the perimeters of playgrounds or at fields.

“According to the by-laws, this is illegal and those tending to such gardens at council-owned fields and playgrounds can be summoned by the city council.

“However, due to the Covid-19 pandemic, I have requested that the city council refrain from taking action against those planting vegetables and herbs on council land,” he said when met at the field at Desa Tambun Indah.

Ng said his proposal had received positive feedback from Rumaizi.

“In my proposal, I asked for residents to be permitted to use a 3m area near fields or playgrounds for community gardening,” he added.

Ng also said that the city council had agreed not to take action for the time being against residents growing vegetables as some could be facing financial difficulties.

“The mayor was supportive of the community gardening idea and my request to refrain from taking enforcement action against residents who build mini gardens on council land.

“The draft on the proposal is ready but has not been tabled at the full board meeting.

“There will be proper guidelines for residents keen to be involved in such projects if the proposal is accepted,” he added.

Desa Tambun Indah resident Margaret Anak Rentap, 42, said she created a mini garden at the field in front of her house because she enjoys gardening.

“I just have to cross the road to harvest what I need.

“The neighbours are welcome to take anything they want for their cooking needs from the garden patch too.

“When the sugarcane or papayas are ripe, I leave them by the road so anyone who wants some can take them as there is only so much, my husband, my 12-year-old and I can eat,” said the housewife.

Margaret who finds gardening therapeutic, spends at least 30 minutes a day caring for the plants.

“I do a major clean-up of the area at least once a week but the plants are watered every evening.

“I have also placed reflexology stones in the garden and I walk on them in the evenings besides taking time to relax on the bench,” she added.

Resident Datin Cheong Sow Ching, 68, too, has planted lots of herbs and fruits in her mini garden.

“Besides using curry leaves for cooking, I also dry the leaves and make tea out of it as it is believed to be good for health.

“I also have pomegranate trees,” she said.

“I use these leafy greens almost daily and I spend about RM30 per month at the market.

“I can save a lot if I plant them myself and the neighbours can also benefit from it,” she said.

At an adjacent residential area, Bandar Baru Tambun, an Indonesian helper called Marwati, 28, has started a mini garden by the side of a playground.

Gardening is a hobby for Marwati, who got her employer’s permission before planting vegetables on an empty plot nearby.

After checking with other residents and getting their approval as well, Marwati went ahead to plant ladies’ fingers, brinjals, basil leaves, pak choy, curry leaves and spring onions.

“Residents will look for me if they want some of the vegetables,” she added.

Agnes Lee, 56, described Marwati as hardworking, blessed with green thumbs and helpful to the neighbours.

“When I go for my evening walks and I see her, she will hand me some vegetables.

“She has also given me shoots for me to grow at home.

“If I urgently require basil leaves, I get them from Marwati,” said Lee.

Rumaizi said for the moment, the city council had no plans to amend its by-laws to legalise community gardening projects.

“Such a concept must be done with consensus of the community and not merely for the benefit of individuals only,” he added. 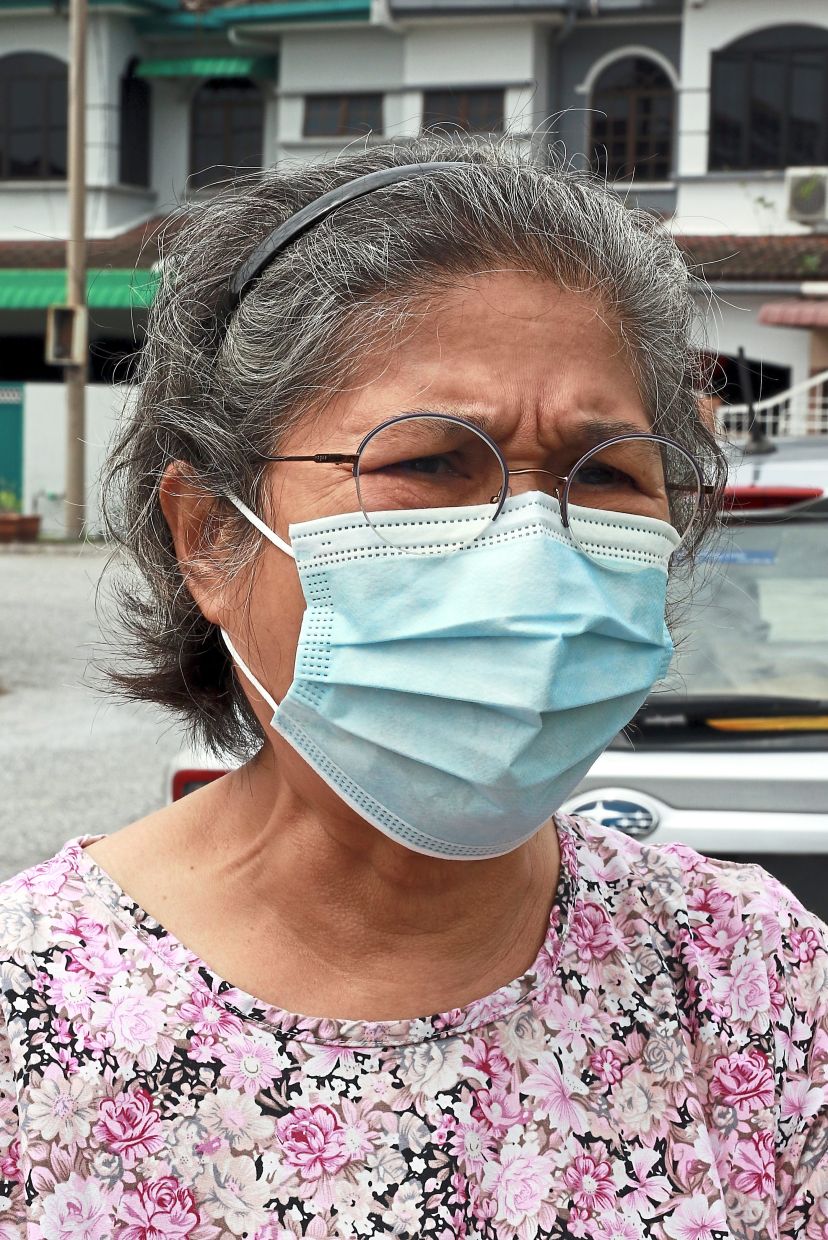 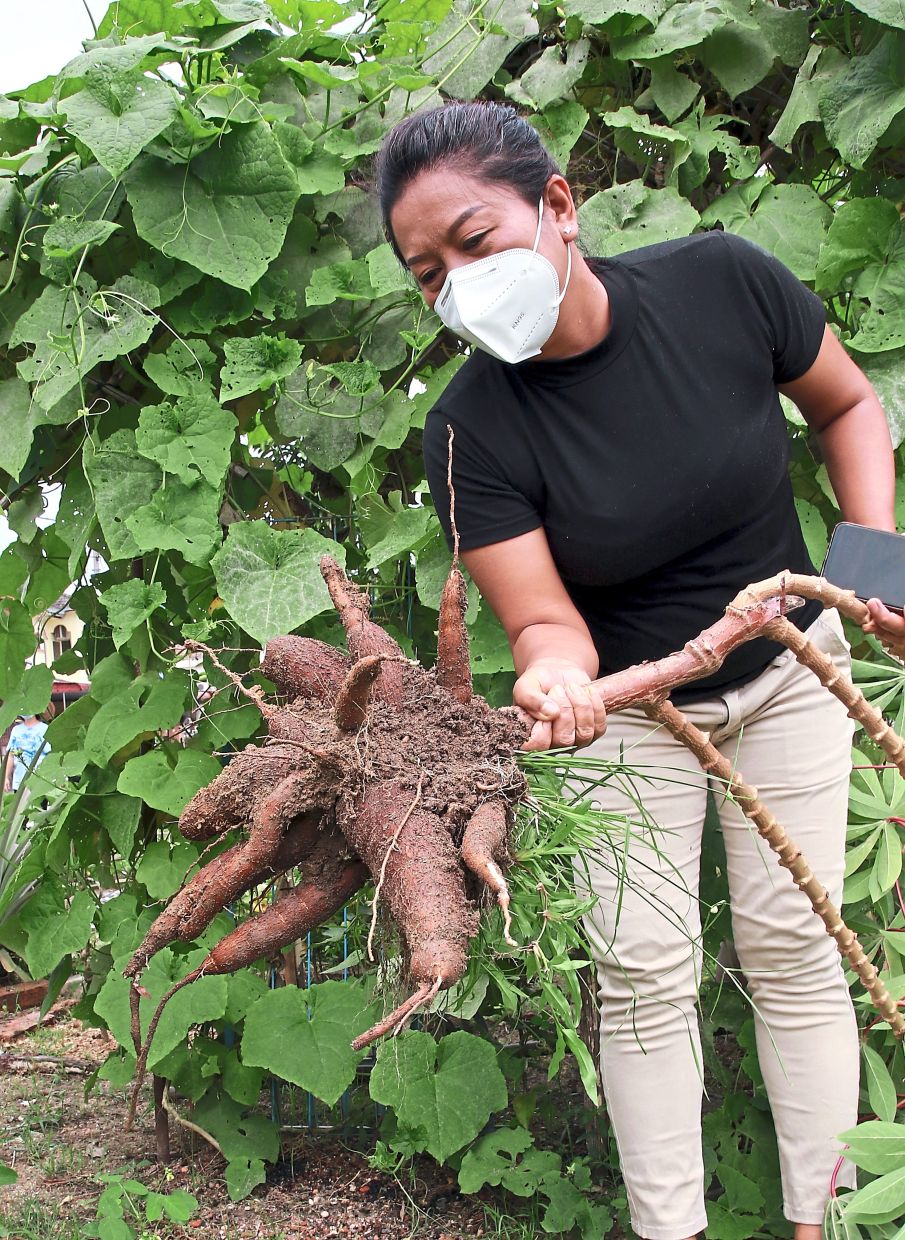 Marwati getting some help from residents of Bandar Baru Tambun residents and Ng (in white) at the community garden.

Noor Lela is keen on planting herbs to keep her expenses down.

Lee is happy to be able to get basil leaves from Marwati’s little plot.