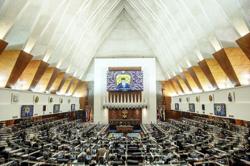 Mohd Yazid plans to continue with efforts to upgrade MPS to a city council.

He said MPS received 166 objections to proposed developments in the draft plan after going through a public inspection process for two months.

“Each objection submitted will be discussed and taken into account in the Local Investigation and Hearing Committee before the draft plan is finalised,” he said during the council’s full board meeting yesterday.

The new local plan will replace the existing MPS Local Plan 2020, which was gazetted in January 2011 and expired at the end of last year.

The plan will be the main reference point in terms of development within a local area, to avoid conflict in land usage.

Due to the lockdown, MPS extended public inspection of the draft plan from May to the end of June to get feedback from stakeholders.

On another matter, Mohd Yazid said MPS continued to take necessary steps to eradicate illegal and unlicensed factories within the municipality.

“Following a census, only 30% of 1,513 factories in Selayang submitted feedback as part of the local council’s factory legalising programme that started last year.

“A consultant will be appointed to carry out another census to determine if there are more such factories in areas not yet covered.

“We estimate about 500 factories remain unlicensed,” he said.

Part of the programme was to clear river reserve areas of factories that could potentially cause water pollution and the shutdown of the state’s water treatment plants.

Prior to yesterday’s meeting, Mohd Yazid was sworn in as the new MPS president.

He clocked in on July 19 after former president Shamsul Shahril Badliza Mohd Noor was promoted to a Federal Government post in May.

Mohd Yazid was most recently deputy director (management) of Selangor Islamic Religious Department (JAIS) and was Sepang district officer prior to being appointed MPS president.

He pledged to continue the vision to lead MPS towards upgrading to a city council by 2030.

He also aimed to upgrade and develop the municipality as an eco-tourism destination.

“About 33% of the area under our jurisdiction is made up of forest reserves and recreational sites.